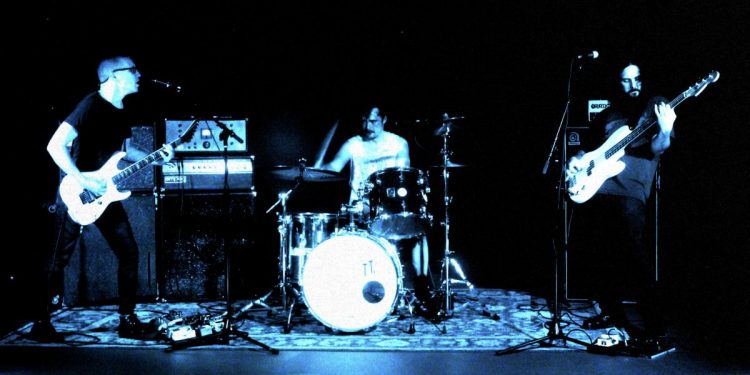 Yautja album The Lurch is the band’s highly anticipated release with new label Relapse Records. Additionally, the Nashville underground trio is pleased to unveil a video for “The Weight” directed by Jerry Roe of Nashville duo Friendship Commanders.

Comments Roe, ” Yautja have been one of my favorite local heavy bands for a while and they’re a group I consider truly unique and energizing in Nashville, and in heavy music in general. Up to this point, I’d only directed videos for my band Friendship Commanders and my bandmate’s solo music, so I was really excited when they asked me to make this video. I’ve long been proud to consider them peers in our local music scene here, so I was overjoyed to work on something with them together as members of this loud but small heavy music community here in Tennessee.”

Adds guitarist/vocalist Shibby Poole, “[This is] a song for those who, while given the opportunity to remain silent, go out of their way to make things harder for others.”

Recorded by Scott Evans at Steve Albini’s legendary Electrical Audio studio in Chicago, The Lurch amalgamates metal, punk, and noise rock into a ferocious hybrid that has propelled the band from the obscurity of the American South onto the international stage.

From the opening roar of “A Killing Joke” and the ominous noise waves of “Undesirables” to the churning cannonade of “Before The Foal,” The Lurch conveys the personal frustrations and sociopolitical observations of its creators. “We’ve got our bubble of friends and artists and businesses, but you drive thirty minutes out of town, and you see confederate flags or people wearing t-shirts that say, ‘Redneck Lives Matter,’” bassist/vocalist Kayhan Vaziri explains, “so there’s a lot of frustration there, and some the lyrics pertain to that.”

Elsewhere on the album, tracks such as “Tethered” and “Wired Depths” discuss the various technologies and systems in place befalling the great populace. Rampant displacement of local communities fuel Vaziri’s opening screams in the track aptly titled “Catastrophic” – “Forced under society!”

Featuring members of several other musical projects including Thou, Coliseum, Mutilation Rites, and more, YAUTJA ‘s collective experiences across the underground and experimental subgenres drive their unique sound. The band’s palpable malaise, malcontent, and sharpened edges are matched by the album’s production – the attack of noisy, whirring guitars constantly veering on dissonance are met with a destructive, mangled low end, as they march on to some of the most creative drumming in the genre. The Lurch showcases a band that is daring, experimental, and unrelenting.

“Everything about The Lurch feels primal. The stalking stab of dissonant guitar riffage. The unsettling atmosphere of tectonic tempo shifts. The murky morass of glacial fuzz and doom. The frenzied bark of disembodied vocals. It’s a record at tension with limbic flight and fight responses, that eternal dance between predator and prey, evoking the band’s namesake in both intent and present danger.” – New Noise Magazine

“ Yautja’s intensity is off the charts on The Lurch, a record that is packed with very understandable and righteous rage that assaults you for 45 minutes.” – Meat Mead Metal

“It’s wild without being scattered, ruthless without overstaying its welcome, impactful without wearing you out. It’s another iteration from one of the best goddamn bands out there today and you’d be doing yourself a major disservice if you didn’t check it out.” – Heavy Blog Is Heavy

“Building on the strengths of Songs Of Descent, developing them, and then fleshing them out with an increased sense of dynamics, emotive heaviness, and savage intensity, the Yautja of 2021 is a satisfying and rewarding beast.” – Wonderbox Metal

“The Lurch infuses new life into sludge and grindcore tropes through unorthodox grooves. Yautja have made their collective chemistry their greatest asset in a way that makes familiar subgenres of heavy music new and unpredictable. The Lurch may be considered the band’s finest work in their catalogue, and once again set the standards for their future work incredibly high.” — Exclaim!