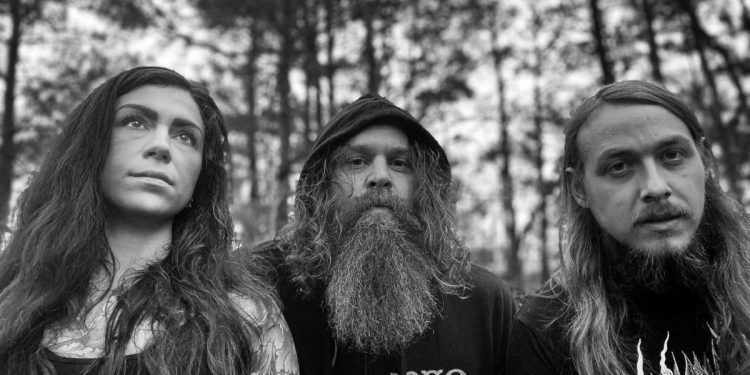 Maryland-based psychedelic doom metal trio YATRA recently finalized work on their most ambitious and devastating release to date. The band proudly offers their crushing third album, All Is Lost, now confirmed for October release through Grimoire Records, who this week issues the record’s cover art, track listing, preorders, and more. Upon release of their acclaimed Death Ritual debut LP, released in 2018 via Grimoire Records, YATRA immediately found a secure place in the doom metal scene, providing a devastating brew of crushing musicianship backed with an equally potent element of psychedelic prowess, inciting widespread reactions from media and fans alike. The band gigged and toured heavily on the album, while work was underway on their second record, Blood Of The Night, which saw release via STB Records in early 2020. Just as the band was primed to peak with a new round of international touring, the COVID-19 pandemic engulfed the globe, and alongside every other touring act worldwide, things came to a stunning halt for the band. YATRA instantly went into full-on construction of the next phase of their journey, taking the ideas they had for the third album into a fresh dimension of instantaneous new reality. The elements of their third LP, All Is Lost, were born, and a new plan was implemented. Once the immediate lockdowns and quarantines of the virus crisis were lifted, the members of the band returned to Grimoire Records, and locked up with label/studio guru Noel Mueller to capture the new songs under the strictest social-distancing-friendly circumstances, to record the new album.

All Is Lost was captured at Tiny Castle between June 18th and 21st, 2020, engineered, recorded, mixed, and mastered by Noel Mueller of Grimoire Records, and completed with cover art by Paolo Girardi (Power Trip, Black Breath, Bell Witch). YATRA’s All Is Lost will see release through Grimoire Records October 9th on CD, digital download, and in a limited vinyl run of 100 copies. Find preorders HERE.

All Is LostTrack Listing:
1. All Is Lost
2. Winter’s Dawning
3. Tyrant Throne
4. One For The Mountain
5. Blissful Wizard
6. Talons Of Eagles
7. Eyes Of Light
8. ‘Twas The Night
9. Northern Lights

YATRA ‘s founder Dana Helmuth divulges, “After three US tours, a successful European tour, many major festival appearances, a great second album, and two more future US tours ahead, as well as a return to Europe being booked, our future looked bright! Then, almost overnight, everything was cancelled and shut down and all that we had worked so hard for was abruptly halted with no idea when our life would resume as we had come to know it as a touring band.

We were literally packed and loaded to head out in mid-March for the start of a cross country tour, when across the country, things started shutting down and quarantine began. After the realization sank in, and then a forced break from playing altogether, as well as our band life in general, due to proximity and difficulty traveling in quarantine, I found myself back in a similar head space I was when I wrote our first album, Death Ritual. Of course, the band has evolved, but the atmosphere of being back in the woods, in that old house again, coupled with the darkness and fear in the world with everything so grim…

With what seemed like no hope for the future of mankind on earth, I started writing this album, All Is Lost, and it flowed out very naturally. With that return to nature and the dark spiritual introspection that follows, it seemed only natural to return to Noel [Mueller, of Grimoire Records] to record this album, back where we started, and I think that comes through strongly in this record. It was important for me to record this as soon as possible, during this time of the virus. Where on our earlier albums we flirted with subtle musical influences in different subgenres of Heavy Metal, we now fully embrace those sounds, and have become them.”

YATRA completed four US tours in 2019 alone, including Monolith On The Mesa, Electric Funeral, SXSW, New England Doom Fest, Grim Reefer, and Descendants Of Crom, as well as a three week European tour including performances for huge audiences at Desertfest Belgium, Hostsabbat, Into The Void, and Setalite among others. YATRA has shared the stage with Sleep, Eyehategod, Uada, Torche, Om, Conan, Big Business, Nebula, and countless others.

Now in 2020, when touring is one element in a questionable future, YATRA delivers their second album of the year with a monolithic statement of not slowing down.