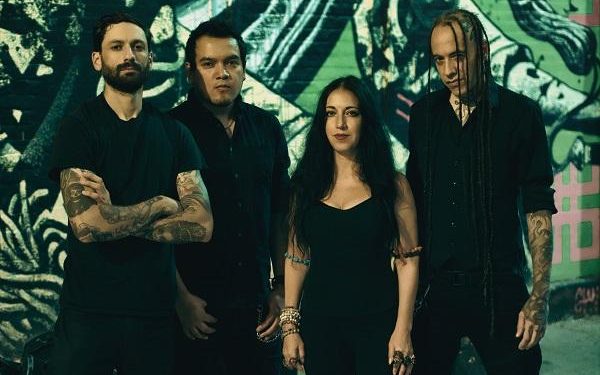 Vajra has revealed a video for “Crown or Crucify,” the third chapter in a sequence of videos tracing the story of the New York-based band’s dark, ambient prog-metal masterpiece Irkalla EP, inspired by the classic hero myth The Descent of Inanna.

The video, which serves as a short film, was written, produced and edited by the band and is available today exclusively via Revolver.

The song itself was inspired by a relationship that had Pinna reevaluating her interpretation of love and the ease of creating one’s own image of another person. “I was attached to the image I created of him,” she says. “Love is like grabbing water with your closed fist. You can’t. It goes where it goes, and your attempted possession of it will only bury you. What is the relationship between love and sacrifice? Between sacrifice and surrender? What do we sacrifice for our partners so they can find the threads that weave them into fuller, more connected beings? What do they sacrifice for us? I was exploring these concepts in ‘Crown Or Crucify” after surfacing from that relationship.”

Weaving a tapestry of melodic rock and dark ambient experimental interludes with a blend of alternative, progressive tinged metal and colorful soundscapes, Irkalla was released in January via Thunder Cult Records. The EP spawned two singles, most recently “ Sever The Tie ” and the first single, “ Maya,” which debuted at #2 on the Billboard Mainstream Rock Indicator Most Added Chart and landed #26 on the Billboard Mainstream Rock Indicator Chart. “Maya” was also an Official Selection, Montreal Independent Film Festival 2021 and an Official Selection, 2021 ARFF Paris.

“The inspiration for every aspect of the EP came to me in meditation and communion with particular Goddess/divine feminine energies,” Pinna says. “Women shouldn’t have to throw an aggressive male lens over their art or replicate aggressive male energy to be present or legitimate in their art. The sensual, subtle body aspects are just as beautiful as the rational, directed aspects. One defines the other, and both are aspects of the one. Balance is key. I can only approach that balance from my perspective, and hope that it resonates.”

Conceptually, Irkalla is the first part of a trilogy exploring the various philosophical and esoteric levels of consciousness. The use of the Sumerian word “Irkalla,” which is a mythological Underworld of sorts from which there’s no return, is both metaphorical and literal. Irkalla was produced by New York native Daniel “Sahaj” Ticotin ( Ra , Mötley Crüe ), whom Pinna was introduced to in 2018 after both were on different spiritual missions in India.

Irkalla follows the release of the dark rock mavens’ 2012 debut Pleroma. Released on the Summer Solstice, Pleroma was a hauntingly dark and hypnotic exploration in paradox that earned the group a cult following and opportunities to tour rigorously worldwide.