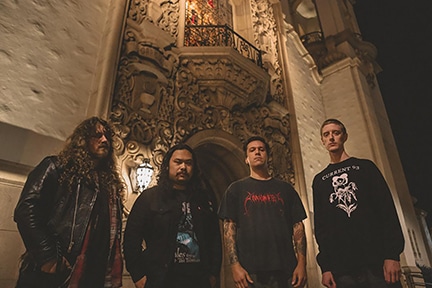 New California metal collective Upon Stone – formed by members of Dead Heat, Vamachara, Hands Of God, Vaelmyst, and more – has just released a new video for “Speak, Lower Angels.” The track is found on the band’s Taylor Young-produced debut EP, Where Wild Sorrows Grow, out now on Creator-Destructor Records.

Established by friends heavily involved in the rich Southern California metal/hardcore underground, UPON STONE was envisioned and formed in the Spring of 2021 through its members’ shared influence of 1990s Scandinavian melodic death metal. The goal of the band’s first material, embodied in their Where Wild Sorrows Grow debut EP, was to balance visceral death metal energy with enveloping atmosphere and dark melody, creating a sound both rooted in melodic death metal tradition, and expansive new sounds that pay tribute to while expanding upon the legendary Gothenburg sound, citing the early masterworks of At The Gates, In Flames, and Dissection as its primary influences.

In May of 2021, Upon Stone joined Taylor Young at his The Pit Recording Studio in Van Nuys (Nails, God’s Hate) where they recorded their four-song Where Wild Sorrows Grow. Completed with cover art by Dominic Pabon and photography by Josh Vega, the EP was surprise-released digitally in October through Creator-Destructor Records, who now launches a vinyl pressing of the record.

The new video for “Speak, Lower Angels,” directed and filmed by 197 Media, showcases the raging live energy of UPON STONE. The band offers, “The lyrical and visual concepts for ‘Speak, Lower Angels’ explore the chaotic energies found in both the natural world and the human psyche with detailed instruction of how to weaponize the bond between them. Ritual strength through melodic death metal magick.”

Upon Stone ’s “Speak, Lower Angels” video can be viewed now through the Creator-Destructor YouTube channel now at THIS LOCATION.

Where Wild Sorrows Grow is available digitally through Creator-Destructor Records, and the vinyl is now available for preorder on two color variants in runs of 250 each, due to ship in March. Stream the album and find physical preorders including merch/bundles HERE.

Upon Stone has also just announced a run of California tour dates in January, supporting Japanese beatdown outfit Kruelty on their first US tour with additional support from Apparition. The shows run from January 13th through 16th, hitting Los Angeles, Oxnard, Cupertino, and Sacramento. Watch for additional shows to be announced early in the new year.