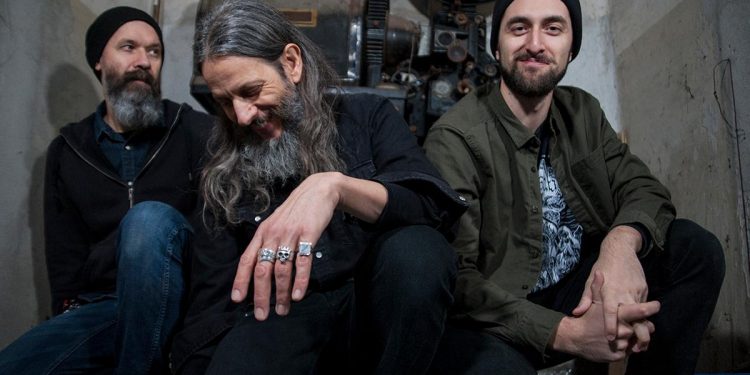 Following a year-and-a-half of hiatus and regrouping, Italy’s reigning champions of immersive, heavy, psychedelic metal UFOMAMMUT announces their return, with a revamped lineup.

UFOMAMMUT spent several years of heavy touring across Europe and the United States supporting their eighth LP, 8 , which saw release through Neurosis’ Neurot Recordings in 2017, resulting in their most successful live ventures in their two-decades-long history. In 2019, the band celebrated their twentieth anniversary, releasing the mammoth XX box set, commemorating their extensive discography. Shortly thereafter, the members experienced some differences on where the band was headed, and in January of 2020, longtime drummer Vita parted ways with the outfit and the band announced an indefinite hiatus. Weeks later, the world would find itself consumed by the worldwide outbreak of the still-ongoing pandemic.

During this ominous past year of outbreaks, lockdowns, cancellations, and severe angst, UFOMAMMUT’s guitarist Poia and bassist/vocalist Urlo channeled their energy into positive action, and silently reorganized the band. Now, they proudly welcome their new drummer, Levre, and the band’s return in 2021.

The band proudly announces, “After celebrating twenty years as a band, UFOMAMMUT reached a point of no return. As a result of an intense and difficult period, our paths divided. At the beginning of January 2020 Vita left the band and UFOMAMMUT announced that it was time to stop for an indefinite period of time. Shortly thereafter, the whole world was overwhelmed by the pandemic, which would have profoundly changed our lives. In this suspended time, we have had time to think, recover the lost energy and plan a new beginning. Now we are ready. It’s time to turn on the amps again.”

While no official plans have been announced, the revamped UFOMAMMUT is already putting projects into action, and new material is under construction. Stand by for further announcements on the band’s upcoming activities in 2021 and beyond over the months ahead.

See more and stay tuned at UFOMAMMUT’s official website HERE , through their own Supernatural Cat label HERE , and through Neurot Recordings HERE .

In related news, UFOMAMMUT ’s Urlo has been hard at work on new material for his solo project, The Mon, which debuted in 2018, with new material on the way this year. He also launched a new online video series during the pandemic, Para(In)Phernalia, with discussions on the gear, equipment, and techniques he and the other members of the band use to produce their sonic and visual creations. The installments have gained a healthy following from the band’s diehard fanbase, which reacts with notes and inquires, making for a very interactive experience.

The Malleus Rock Art Lab collective, which is also directly operated by members of UFOMAMMUT and Supernatural Cat, has also just launched their own new clothing line! Featuring bold prints and artwork created by the cooperative outfit, from the cotton used to the label applied to each garment, up to the shipping packaging, the group paid great attention to every detail of the new project. The entire printing and production process is 100% created in Italy and it’s carried out by Turin-based lab Sericraft.

Watch the existing Para(In)Phernalia episodes at YouTube HERE and watch for additional installments to post steadily over the forthcoming months. See the current Malleus apparel designs and watch for new ones to post HERE.