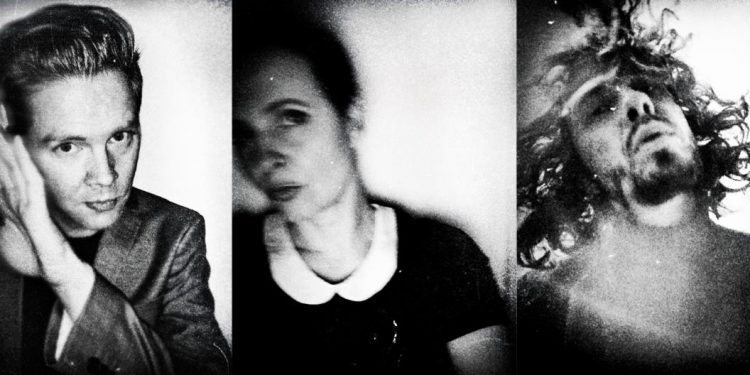 Following Tony Conrad’s concept of maximalism in minimal music, Trialogos’ widescreen Super 8 soundscapes and occasional haunted house vocals conjure up visions of Winter lost beaches, bats dancing upside down, and sojourns in permanent dawn. What we hear in these “trialogues” is one word sounding through the other. Like in a doubly exposed photograph, the individual elements become both more ethereal and more defined. They touch and blend, align and dissociate at the same time and take on the remarkable capacity of ghosts: the ability to inhabit one another, one voice speaking through the other.

TRIALOGOS ’ three members arrived here through quite different musical backgrounds and experiences. Singer-songwriter and visual artist Conny Ochs is a troubled troubadour of the special kind, who gained massive recognition for his highly praised collaborations with Wino. Sicker Man works as a composer and producer for film and theatre scores and explores the musical field in between experimental pop, noise, and instant composition, using and processing the cello as his main instrument. His movie score for Simon Barrett’s ( You’re Next , The Guest ) directorial debut, Séance , will be released through Lakeshore Records on May 28th. The third corner point of this mystical triangle is represented by Kiki Bohemia, a singer and autodidactic player of lost and found instruments and toys, who is also Sicker Man’s longtime partner in a variety of different projects, such as the doom duo Slutty Clowns.

The idea for a collaboration first came up in an underground backstage room at the Zukunft Club in Berlin, where the three artists shared the stage for a concert. The three of them got together for the first time in an experimental improvisation as part of an art exhibition in Sassnitz, Germany during the Summer of 2020, where things started leading towards what is now Trialogos.

In response to the altered living and working conditions during the pandemic, Sicker Man and Kiki had started a daily series of livestream concerts called Cleansing Drones For Locked Down Homes in March 2020, designed as an experimental musical ritual to comfort and express emotional and artistic turmoil during a state of emergency. When Conny Ochs joined in as a guest in the Autumn of 2020, they expanded the technique of those “dialogues” to include the voice of a “third,” taking collective soul searching and notion of self-transcendence to a further stage. Locked up in their studio in Berlin, seeking solitude and introspection, the trio recorded Stroh Zu Gold within just three days, gaining new artistic vision and transvaluation from this almost eremitic kind of lifestyle.

The album was officially presented to a selected audience during the Roadburn Redux virtual festival in April 2021 as a streamed live show from the stunning location UT Connewitz in Leipzig, a more than one-hundred-year-old cinema. The response was just overwhelming, and the band left the crowd mesmerized. A first, handmade edition of the album on vinyl sold out while the concert was streaming and was out of print before it was over.

Stroh Zu Gold was recorded at blankstudio Berlin in October 2020, produced by Tobias Vethake and Trialogos, with additional recordings by Conny Ochs. The album was mastered by Andreas “Lupo” Lubich, and completed with artwork by the band members, primarily Ochs.

Stroh Zu Gold will be issued June 18th in a four-panel mini-gatefold CD, 180-gram pure virgin black vinyl LP including a download card, and digital platforms. Preorders are available at the Exile On Mainstream webshop HERE.

Watch for additional music from Stroh Zu Gold and the full TRIALOGOS Roadburn Redux set to be made available over the weeks ahead.