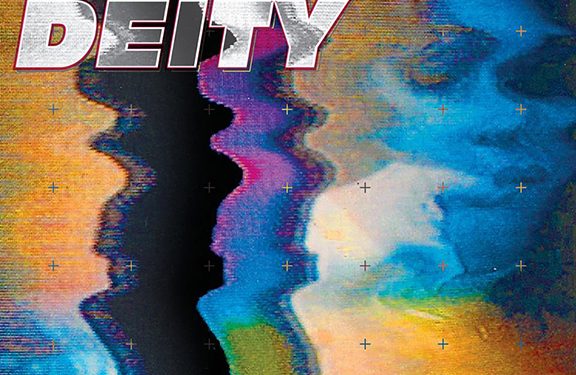 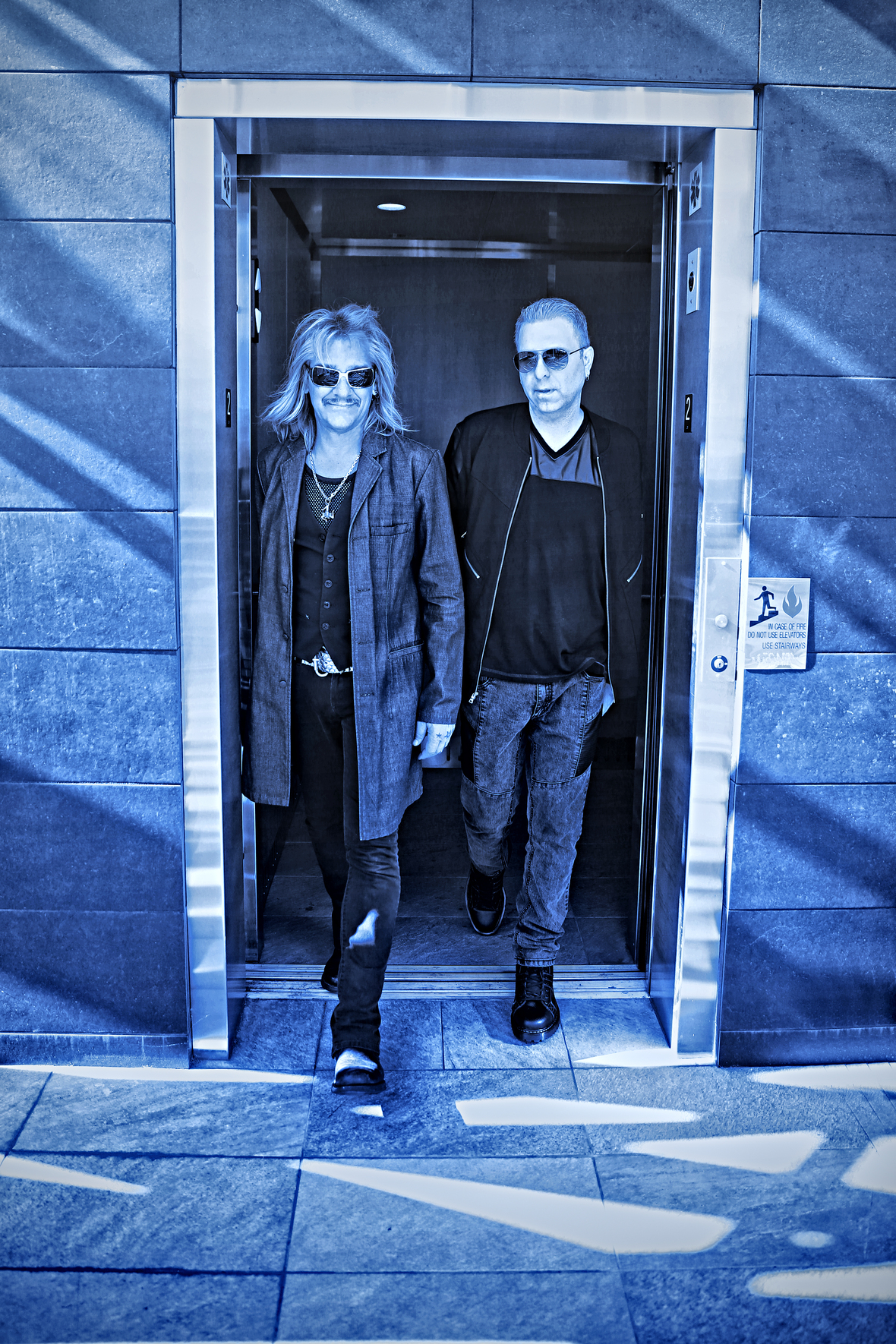 “a true electro-rock masterpiece…This is hands down the best electronic rock album that I’ve heard all year long!” – XSRock 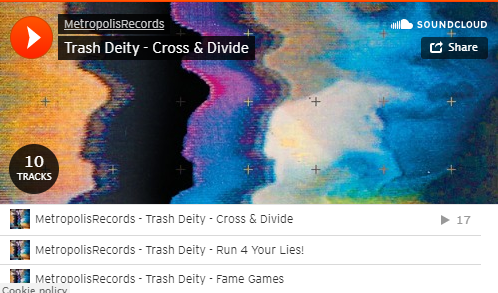 “While it may be hard to separate the Wax Trax! origins of Trash Deity’s members, you don’t have to be a dyed-in-the-wool aficionado to get your ass shaking to this album. Rather songs from this album should fit comfortably alongside contemporary dance floor numbers. That’s all to say rivetheads will love it, but even genre outsiders will find an appreciation for Cross and Divide.” – The Void Report 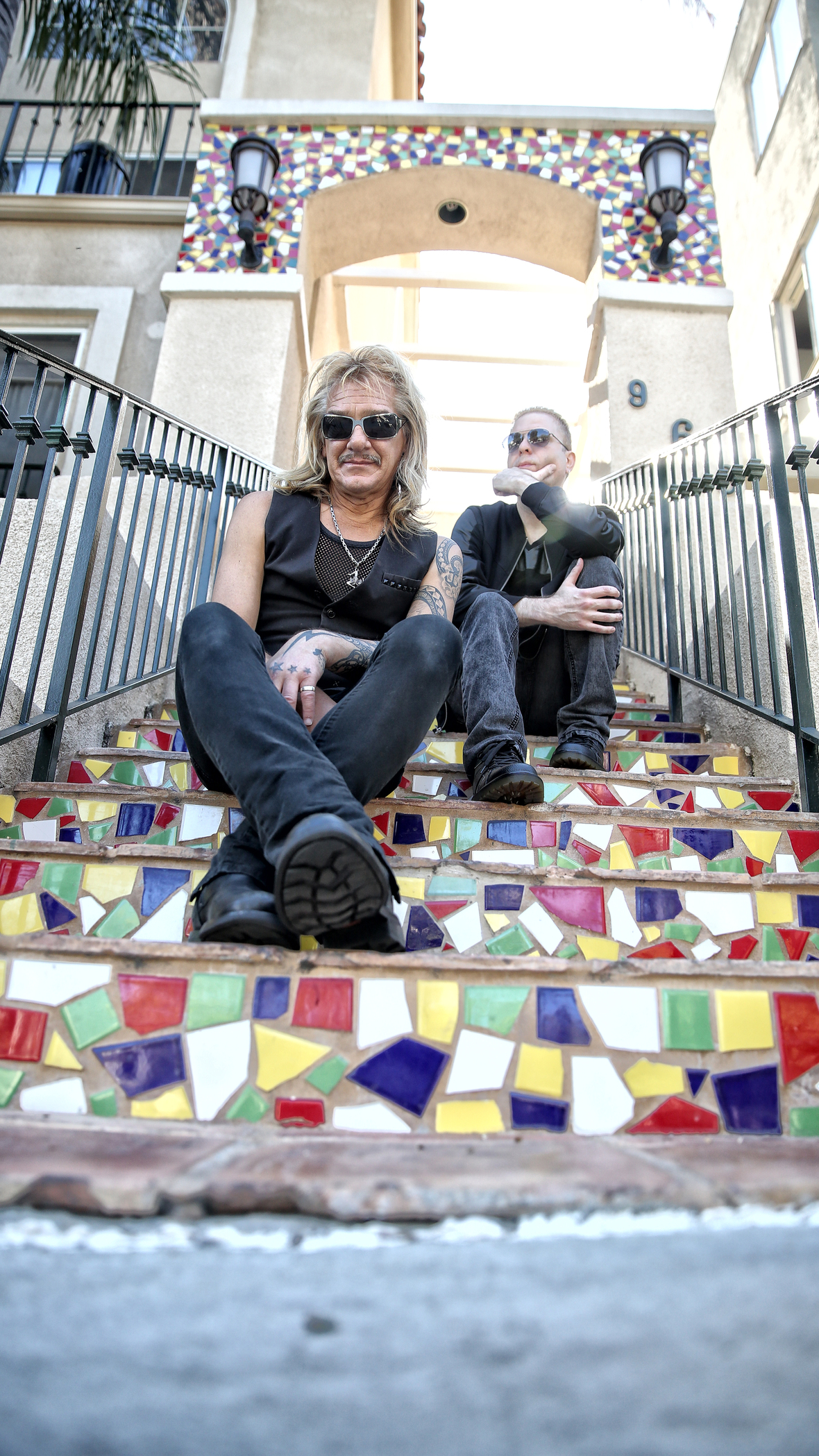 Coming from Los Angeles with roots in the legendary Chicago Wax Trax! scene is the new duo Trash Deity. Combining the chaos and energy of the classic Wax Trax! sound updated with hard and modern production, Trash Deity is Groovie Mann aka Franke N. Nardiello (My Life With The Thrill Kill Kult and accomplished music producer and Industrial artist John D. Norten (Blue Eyed Christ). The debut Single, “Finger on a Trigger”, combined classic Groovie Mann vocals and cryptic lyrics with an infectious heavy electronic/guitar groove benefitting from Norten’s studio experience with major artists. The accompanying unique Music Video was comprised entirely of manipulated shots of paintings from the twisted imagination and eccentric mind of Groovie Mann. The second single and video, “Run 4 Your Lies!” was released in 2017 solidifying Trash Deity and catching the attention of Metropolis Records

2018 marks the anticipated release of the debut album, Cross & Divide, on Metropolis Records.

“Cross & Divide Album is an album for now and is a representation of the confrontational and divisive times we live in. It’s a journey into the manic world of Trash Deity from the opening invitation of “Let’s run away” to the powerful closing Album statement “Change”. Each song has its own identity, but the album was designed to be a trip on a journey. It sounds totally cohesive and totally chaotic at the same time…just like us!” – JDN

What was the earliest influence in your life that led you to a music career?

the vibrations from my mother’s record player that she kept under my crib. She was 19. – Groovie Mann

Nardiello’s informally structured and yet deeply storied career began with his first band, Special Affect, including Marti Sorenson & Harry Rushakoff (Concrete Blonde) with Al Jourgensen (Ministry) on guitar. Shortly after, he moved to London working with Simon Raymonde of Cocteau Twins with post-punk band Drowning Craze, recording a John Peel session in 1982. While touring with Ministry in 1986, he met and began working with Buzz McCoy (Marston Daley) to write a film titled Hammerhead Housewife and the Thrill Kill Kult, which was never filmed but ultimately evolved into TKK and an EP released with Wax Trax! Records. Over the next nearly 30 years, Groovie Mann has established his iconic reputation with TKK and contributed songs to several movie soundtracks, even appearing in the 1994 cult classic film The Crow. He’s also established himself as an accomplished painter in the LA art community. His uniquely abstract style offers a further peak into the mind and art of Groovie Mann and are sold to fans around the world.

What would you consider to be the ‘crossroads’ that directly led to you actively pursuing a musical career?

I would say my first Blue Eyed Christ record deal with KK Records in Belgium right out of High School for Leaders + Followers. It legitimized what I was doing for the first time and made me realize people outside of my bedroom studio may be interested in what I was doing.
JDN

John D. Norten also emerged from the 1990s Chicago Industrial scene as the leader of Blue Eyed Christ. The debut album, Leaders + Followers, was released internationally on Belgians classic EBM/Industrial label KK Records while still in his teens. Over the next few years, Blue Eyed Christ was featured on several prominent compilations and played the New Music Seminar in 1992 at the Limelight with Clock DVA and Chemlab. Blue Eyed Christ continued playing visceral live shows throughout the 90s and Norten continued recording at Chicago Trax Recording Studios working with established musicians and engineers from Ministry, Nine Inch Nails, and more. In 1996, Norten relocated to Los Angeles and has established himself as an in demand mixer and engineer for many of the biggest artists in the world including The Black Eyed Peas, Prince, CeeLo Green, and Lady GaGa.

How are you inspired to start a song and how does that develop from writing to composition, recording, and completion? What was the process for this project?

Jump into it -improvise with & without notes, laugh & cry & argue with the producer. – Groovie Mann

I usually start with the drums and music, but really anything can be the creative spark. When I first met with Groovie Mann he came over and I played him a bunch of instrumental tracks I had and he choose the ones that inspired him the most lyrically. He would write to them while he paints at home and then come over with notebooks full of ideas and inspirational goodies. Once we wrote the lyrics and recorded his vocals, I’d go back in and add more music and elements and we’d arrange that into the songs. The whole process was very organic. – JDN

Cross & Divide ultimately reflects both their shared roots as well as their unique and individual approaches to songwriting and recording. Groovie Mann’s spontaneous and poetic lyrical reactions to Norten’s carefully constructed song productions makes for a compelling mix of something new with enough of a nod to the past sure to please the old school fans and the newly initiated.