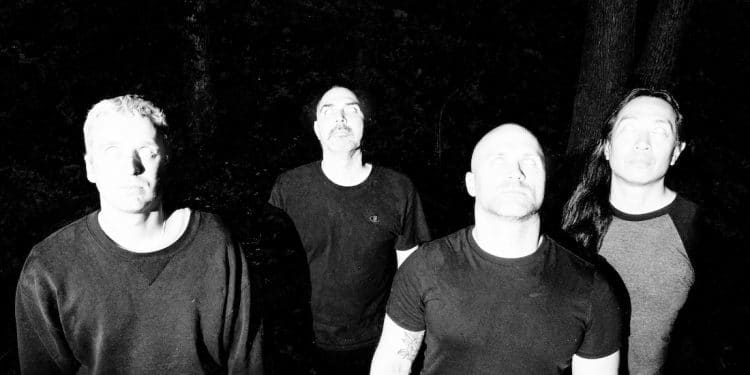 Tooth and Claw shared their haunting new single “Seventy Times Seven” today via a premiere with BrooklynVegan. Heard on the Metallic hardcore band’s upcoming debut full-length Dream of Ascension, the track starts out with eerie clean guitar before quickly shifting into a harsh chugging attack. The band continues to mix these extreme dynamics throughout “Seventy Times Seven”, exploring out-of-the-box elements that the accomplished members haven’t delved into on previous projects. This duality matches the track’s concept of exploring the existential horror of what lies beneath the surface of one’s psyche.

Listen to “Seventy Times Seven” here ahead of the release of Dream of Ascension on May 21st via Good Fight Music, which is available for preorder here.

Speaking to BrooklynVegan about the creation of the song, vocalist Daniel Austin says:
“So Scott sends me the song and warns me there is a spooky clean part in it, and I laughed, but I immediately thought I have to do something different here, that there was a lot of potential in this song to strike some deep, uncomfortable chords in myself, and listeners, too. I didn’t think it would be appropriate to scream over the clean part. I don’t consider myself someone with a knack for singing (to speak of myself kindly), so I tried to channel my inner Leonard Cohen. I figured if I could hold two notes like Leonard while delivering some hard-hitting, heavy lyrics, I might be able to make this work! I feel satisfied with the result. Both Scott and I tried something new here, and it really caused us to develop a fondness for this song.”

About Tooth and Claw
Tooth and Claw became a band during the COVID-19 shelter-in-place orders of Spring 2020. The groupfeatures Scott Crouse (Earth Crisis, Sect), Daniel Austin (Die Young), James Chang (Undying, Catharsis, Sect), and Cameron Joplin (Magnitude) exploring new realms of aggression. On their debut album, Dream of Ascension, Tooth and Claw skirt the typical tropes found in hardcore by mixing their bludgeoning attacks with sinister melodies, achieving a balance of innovation and pure aggression. Dream of Ascension is due out May 21st through Good Fight Music.
Tracklist:
1. Dream of Ascension
2. Your Crucifixion
3. Time’s Desire
4. Seventy Times Seven
5. Kiss of Night
6. Arrival
7. Torn in Half
8. Spiritual Lust
9. Ravage