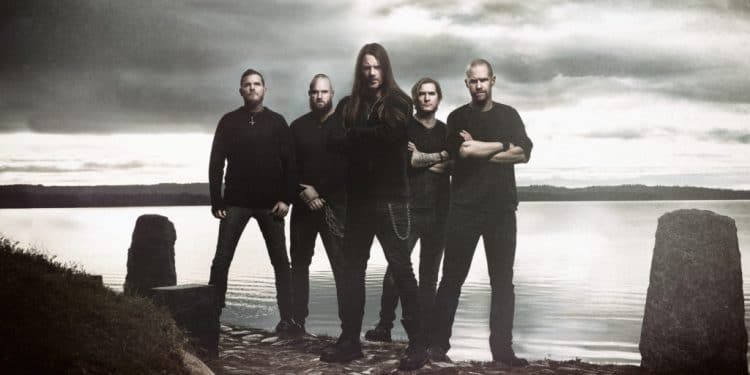 Thyrfing announces their latest single, “Jordafärd” (which translates to “Burial”). The track can be heard at MetalSucks and comes off the Swedish Viking/pagan metal veterans forthcoming Vanagand full-length, set for release on August 27th via Despotz Records.

Vanagandr, serves as the band’s first true studio recording in eight years, was co-recorded and co-produced by Jakob Herrmann (In Flames, Machine Head, Evergrey) at Top Floor Studios, in Gothenburg, Sweden with renowned producer/engineer Jacob Hansen (Volbeat, U.D.O., Katatonia) looking after the mix and mastering. The art concept for Vanagandr was executed by former Dark Tranquillity guitarist Niklas Sundin of Cabin Fever Media who reconnects with the band once again (he did the Vansinnesvisor album back in 2002).

A brooding epic, “Jordafärd” highlights a more morose side of the band. There are many differences when compared to first single “Döp dem i eld,” released in March of 2021. The distinct cello parts for the track were recorded by Fox Skinner (Grand Magus) along with Dutch artist Lon Snow, and we also hear Swedish soprano Natalie Hernborg in the finale. The track will be released along with cover artwork and beautiful visuals again by Niklas Sundin .

Issues the band of “Jordafärd,” “This is the slowest and probably moodiest song on the album. A burial hymn and a longing for the end – the perfect album closer.”

Says MetalSucks, “If Insomnium leaned a little bit away from doom metal and little bit towards black metal and folk metal, the results would probably sound an awful like ‘Jordafärd.’ The second single from THYRFING ’s first album in eight years, Vanagandr , is heavy, epic, emotional, cinematic, and evocative. The title translates to ‘burial,’ and the track does, indeed, have a sort of funeral dirge quality to it, what with its mournful guitar solo, sweeping orchestral parts… and the wailing operatics during its conclusion… but it’s a viking funeral. There’s fire arrows being shot into a body as it drifts away on a waterfront…”

THYRFING emerged from the ever-growing underground scene in Sweden back in 1995. After seven full-length albums and numerous live performances worldwide, the band stands among the most revered of the Viking/pagan metal genre and 2021 will prove that THYRFING are so much more with a truly outstanding and self-contained musical offering.

Monikered in honor of the sword “Tyrfing” in Norse mythology, a cursed blade that appears in several tales and myths, mythology has played a profound role in the scenery and imagery of THYRFING ’s music and lyrics, something which is still intact in 2021.

Despite there being no new studio recordings since 2013’s acclaimed De Ödeslösa , THYRFING has remained active on the tour circuit with appearances at the likes of Wacken Open Air, Summer Breeze, and Sweden Rock Festival, amongst many other shows and festival slots. The lure of creating new music always remained however, and beginning in 2015, plans were made for what would become Vanagandr , the band’s eighth studio release.