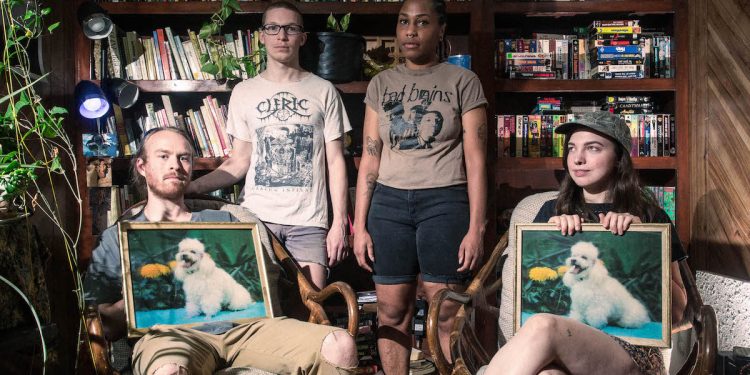 Nashville hardcore group Thirdface single “Buck” is out just ahead of the release of their debut full-length via a premiere with The Hard Noise. The album Do It With A Smile, out March 5th via Exploding In Sound Records, is a caustic and innovative approach to hardcore from the quartet made up of members from Yautja, Sallow, Donors, and the DIY collective Drkmttr. Clocking in at just 36 seconds, the explosive track is a burst of maniacal energy but the band remains tightly in the pocket on one of the most ferocious tracks on the record. Do It With A Smile is out this Friday and pre-orders for the album are available here.

Nashville, as a music scene, breeds variance. It’s about as unpredictable as Tennessee weather, where shockwaves of different genres create ripple effects larger than a mixed bill. Coming together from different projects and spaces within the DIY community, Thirdface — vocalist Kathryn Edwards, bassist Maddy Madeira, guitarist David Reichley, and drummer Shibby Poole — blends together the resilient work ethic of their surroundings and the guiding principles which allow them to flourish past a night of local sets. Thirdface applies this knowledge through the furrowed brows of hardcore, references to horror films and Black westerns, and an unrelenting approach that saves no breath. And on their debut full-length (and first outing for Exploding in Sound Records), they Do It With a Smile.

While the band’s demo was written entirely by Reichley and recorded by Poole, Do It With a Smile is Thirdface’s first collaborative effort. Poole recorded it in the attic of a standalone garage where the majority of the band lived at a critical point of transition. That said, their record carries with it what was forced into harsh relief that year: frustration at the cyclical torture of wage slavery, ever-present and ever-thin allyship and feminism, and a low hum of negative thoughts, hopelessness, and the struggle to survive in an unforgiving world. Edwards turns those dark moments into relentless examples of catharsis, whether by using Buffy the Vampire Slayer as a stand-in (“Chosen”) or directly addressing evils in a community, like clout-gobbling men (“Local”) or exceptionalizing allies that speak over who they claim to support (“Ally”).

Thirdface’s brand of Southeast hardcore is informed by the storm clouds that circle over the working class and Black people in the South. Do It With a Smile seeks retribution for all of these crimes: sometimes in the world of Clive Barker, oftentimes in the communities that will receive it. It’s a wild and tumultuous journey. But tonight, Thirdface rides.