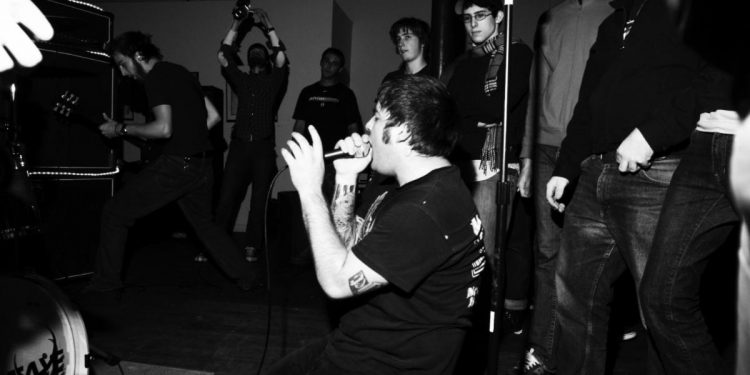 Eighteen years after its initial delivery, There Were Wires’ Somnambulists arrives in grand vinyl format, remastered for optimal listening. The LP features all-new artwork with a gatefold jacket and included download and contains a previously unreleased cover of “Tunic” by Sonic Youth as a bonus track exclusive to this release.

The new video for “His Talk, Her Teeth” was created from live footage filmed by Matt Spearin and Ben Sisto, and recently edited by Michael Quartulli (Doomriders) for this new version of Somnambulists . The members of the band offer, “This video perfectly captures the feral intensity of There Were Wires’ live shows from 1999 to 2004. Whether they were playing a big stage or a tiny basement, there was always a wild, unpredictable energy and that’s part of what made it so fun. The video was edited by bassist Jebb Riley’s former Doomriders band mate, Michael Quartulli.”

With their premiere of the new video, Decibel writes, “Those who remember the late-’90s and early-’00s wave of metalcore that spawned such seminal acts as Converge, Cave In, and Isis may remember Massachusetts hardcore crew THERE WERE WIRES , whose former members went on to play with Doomriders and Disappearer. The frantic blend of chaotic hardcore and moody post-metal led the band on tour with Daughters and Zombi, plus shows with Converge, The Dillinger Escape Plan, Mastodon and other stalwarts of the scene at the time through today… anyone with a love for Deadguy, Cave In, and bands like Zao should take notice of THERE WERE WIRES .”

See THERE WERE WIRES’ “His Talk, Her Teeth” video first via Decibel Magazine now at THIS LOCATION .

There Were Wires reunion shows will be announced for late 2021/early 2022, whenever regular touring safely resumes across the country.

THERE WERE WIRES was an underground hardcore/metal band from Boston that formed in the late ’90s. They quickly gained notoriety in New England for their intense and chaotic live shows, playing regularly throughout the early 2000s, sharing stages with prominent bands like Mastodon, Converge, and The Dillinger Escape Plan, along with successful tours with Daughters (Ipecac Records) and Zombi (Relapse Records). One of the early pioneers of the doom-metal genre, the band became an influential giant that would pave the way for a wave of slow, heavy music that would follow the band’s demise. Members of THERE WERE WIRES later went on to play in Doomriders (Deathwish Inc.) and Disappearer (Dark Operative), among others.

Originally released on Iodine Recordings in 2003, Somnambulists was There Were Wires’ second album. The record was a departure from their original fast and thrashy sound, which was dominant on their self-titled debut. For this release, the band worked with producer Matt Squire at Camp Street and Q-Division studios. By this time, There Were Wires had matured as song writers and constructed songs considerably longer and more intricate than anything previously written. These tracks belied much of the frenetic energy of earlier works, moving glacially at times, winding tension with extended buildups and clean vocals while still maintaining its intensity.

Somnambulists was not only a dramatic departure from the punchy abruptness of There Were Wires’ earlier sound, but a welcomed one, as well, and the record was met with much acclaim from fans and critics alike. A full-album experience that combines heavy, droning, and bluesy riffs with atmospheric interludes, Somnambulists follows a theme of loss, regret, sleepwalking, and darkness.