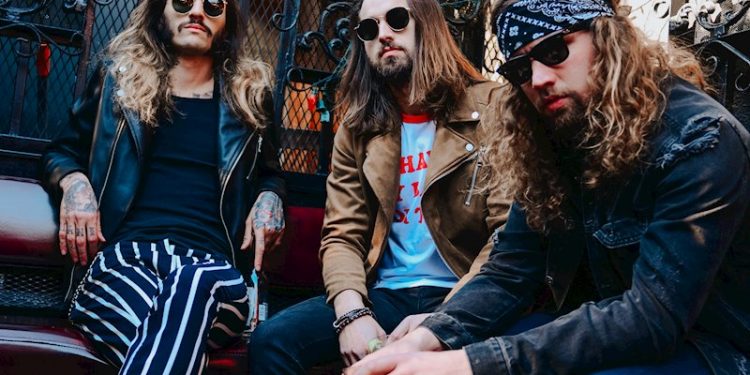 After two years of touring their previous release Rollin’ Stoned and Livin’ Free, Them Evils are kicking things up a notch with tales from the road with new single “Where Ya Gonna Crash Tonight?” to be released on Friday, May, 29, 2020. The song shows the band exploring new territories and maturing in their writing, while maintaining the signature sound of “Classic Rock, Modern Roll” that captured the attention of fans around the world.

“Where Ya Gonna Crash Tonight?” is their most upbeat track to date featuring heavy guitar tones, pounding drum sounds, and catchy vocal melodies that stand alone from the band’s previous work. Part of this is due to their recent collaborations with Kevin “Thrasher” Gruft (Escape The Fate) Aaron Edwards (Sick Puppies, Black Veil Brides) and producer Jim Kaufman (Danny Worsnop, The Black Moods, Night Riots).

Drummer David Delaney II says ” ‘Where Ya Gonna Crash Tonight?’ is a song that reflects on our experiences while on tour. There’s always a level of uncertainty when waking up in a bus and heading to the next city to play a show. You never know where a night is going to take you when you are having a good time and living in the moment. But there is an inevitable question that comes up sooner or later — “Where Ya Gonna Crash Tonight?”. The lyrics in the song give details on what we go through on a daily basis living the “Rock N’ Roll” lifestyle that people daydream about.”

Them Evils Single “Where Ya Gonna Crash Tonight?”

He continues: “When we sat in a writing room with Thrasher and Aaron we instantly hit it off. After slamming a few beers and sharing tour stories we knew that we were going to accomplish exactly what we were setting out to do! Once the writing/demo sessions were over — we immediately set up recording time with our good friend and producer, Jim Kaufman, at his home studio. Working with Kaufman is a humbling experience of its own. He’s a guy that makes you feel comfortable contributing ideas and pushing you to achieve something better than before. With all his knowledge of production he was able to channel the energy of the demo and catapult it to the highest level – we were all speechless when hearing the final product. With the time that’s gone by since our last release, we couldn’t be more stoked on getting back at it with ‘Where Ya Gonna Crash Tonight?’.”

Their previous EP Rollin’ Stoned and Livin’ Free was enthusiastically received with placements on Key Rock playlists at all major streaming services, and the band supported that release with more than 100 live dates in 2018 that included a national headlining club tour with stops at Shiprocked, Welcome To Rockville, Carolina Rebellion, and main stage at Rock On The Range. In 2019, the band supported Pop Evil, Of Mice and Men, The Black Moods and He Is Legend, Them Evils also made festival appearances at Exit 111 and Rock USA. Positive Press looks were posted at Kerrang, Loudwire, AXS, Rock Revolt, Alternative Addiction and others that added to the band’s critical acclaim.

Them Evils plan to continue touring as they soon as they can safely do so, with tours and festival dates currently being explored for the latter part of 2020.