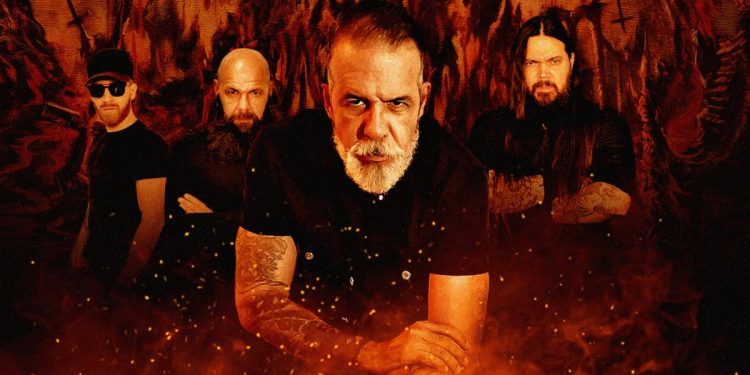 Brazilian death metal band The Troops of Doom EP The Absence Of Light unleashes this September.

The Troops of Doom released their debut EP, The Rise Of Heresy, worldwide in October 2020. Despite its brevity, the offering reaped critical accolades from fans and media alike with Decibel Magazine hailing the band’s distinctly, “mean, mid-paced death metal that cycles between foreboding and downright groovy,” adding, “when the grooves hit, it’s hard not to bang your head.” Bravewords lauded, “a demonic thrash attack with killer riffing and bombastic drum work,” while BrooklynVegan noted, “The band intentionally hearken back to the evil, thrashy, proto-death metal sounds of early Sepultura (and to Sepultura’s own influences from back then, like Celtic Frost), and [they] do it with extreme conviction.”

A conceptual work inspired by the book Leviathan, from 17th century English philosopher Thomas Hobbes, The Absence Of Light was mixed and mastered by Øystein G. Brun (Borknagar) at Crosound Studio in Norway and features the legendary Jeff Becerra of Possessed sharing vocals on the track “The Monarch,” Lars Nedland of Borknagar, Solefald, and White Void on bass on the first three tracks, and Dave Deville conducting the orchestral introduction. The EP includes a version of Sepultura classic “Antichrist” mixed by Leonardo Pagani at LP Mobile Studio in Brazil, in addition to the demo versions of “The Devil’s Tail” and “The Monarch.” It all comes housed in the arresting cover art of Brazilian painter Maramgoni . With the world still uncertain in these pandemic times and the band being forced to postpone their European tour — and consequently their full album — to 2022, the EP serves a bridge piece to the impending LP.

The Absence Of Light will see release this September digitally via Nuclear Blast digital subsidiary Blood Blast, on CD via Voice Music in Brazil, Metalized Records in Mexico, and Hellven Records in Portugal, on vinyl via Anomalia Distro in Brazi and Hellven Records in Portugal, and on cassette by Repulsive Echo Records in Greece. A street date and preorders will be announced in the days to come. In the meantime, view video teasers featuring Becerra and Nedland below.

The Troops of Doom EP The Absence Of Light Track Listing