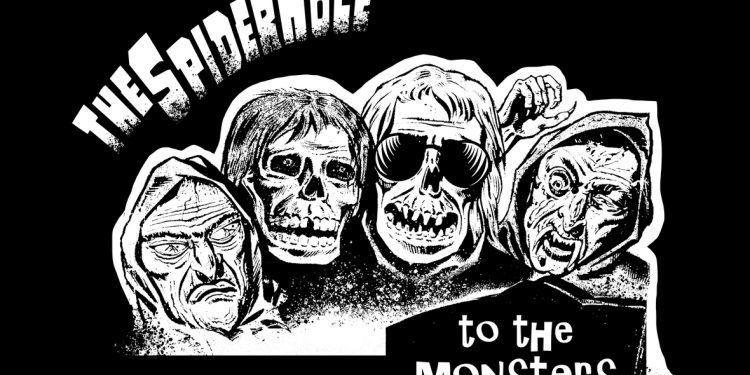 Phoenix, AZ based, Dark Alternative Rock Band THE SPIDER HOLE has announced the launch of a Kickstarter Campaign to help support their upcoming LP and associated graphic novel, To The Monsters. The unique project is built around the LP with 11 original songs, each about a different monster, as well as a 100 page horror anthology graphic novel written and illustrated by vocalist Ethan Scott; each story in the novel is about a different band member over the course of one fateful Halloween night.

To celebrate the upcoming launch, the quartet has revealed their first single, “The Skeleton Wedding,” from the album To The Monsters.

“We were at The Quarry in Bisbee grubbing and waiting to go on stage when Ethan asks everyone in the band what their greatest fear is. He wants to do a horror anthology comic to put out with the new album. Before we were even called to the stage, all four stories were basically written.” – The Spider Hole

A quartet with frequent guest musicians, The Spider Hole performs songs meant to stir brains and rattle bones. Based in sun-scorched Phoenix, AZ, the band started banging sounds together in the late nineties, and has steadily developed an aural stew that is partly rock, partly cabaret, partly blues, and partly goth. Influences include Tom Waits, Oingo Boingo, Siouxsie and the Banshees, Primus, The Pixies, Frank Zappa, The Doors, and your face when you taste something unexpected. New music is being prepped for a new full-length album called To the Monsters, due near the end of 2018.