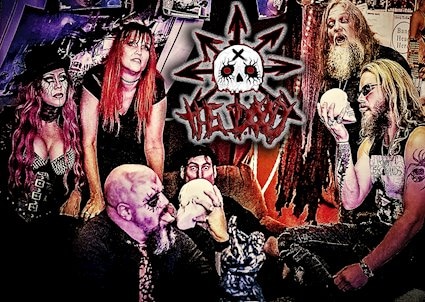 The DOOD single “Kill The Light” can be found on forthcoming studio album, Firefly.Hailing from rom Sarasota, Florida, the band is a theatrical heavy metal band with national touring experience. They have released Four studio albums:

When Push Comes to Fight
Playtime in the Apocalypse
Beautiful Ride & most recently
BUTTERCUP!!!

Right now they are releasing the first single from their 5th studio album, Firefly, produced by the Legendary Matt Laplant (Soil, Skindred, Nonpoint etc) and to be released in August of 2021. This first single is called “Kill the Light” with video to be released simultaneously and are very enthusiastic to finish the remaining tracks and get back to what they love passionately, playing live.

They have graced the stages of many a venue in America particularly the east coast and New England with their horror circus brand of theatrics and hard-hitting music. Originally formed by Raynus and Jonzey DOOD, their music is high energy, thought provoking, and fun. They are often cited as having notes of traditional metal, akin to Pantera and such, NU metal, Five Finger Death Punch/Slipknot, as well as a classical metal feel as well although the actual feel of the band is a unique blend of a style of their own and the wide variety of influences they share. The band regularly engages in feeding the homeless on the west coast of Florida and has received accommodations for their participation with benefits to help school music programs and Humane Society events. The DOOD Is currently endorsed by Sinister Guitar Picks and Pandemic Scumwear.

The DOOD has had the pleasure of being support for the following bands, as well as many others: