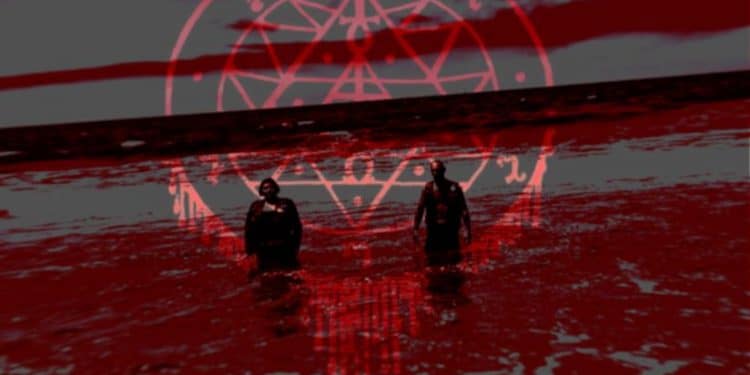 San Jose, California occult rock collective Thangorodrim is preparing to release their debut album, Liberation In Unbound Chaos 666, through Nuclear Blast’s digital subsidiary Blood Blast Distribution in November. Today, the band unveils the cover art and lead single from the record through a visualizer for “Through The Devil’s Door,” premiered at Decibel Magazine.

Thangorodrim delivers fire and fury with their unique blend of soulful, Satanic hymns, matched with an intoxicating, chaotic groove. The band aims to spread their Anti-Kosmic Chaos far and wide, channeling mysticism with a psychedelic edge. Drawing on influences such as legends Roky Ericson of The 13th Floor Elevators and Jon Nodtveidt of Dissection, this commanding collective demonstrates a sound, direction, and devotion unlike no other.

Liberation In Unbound Chaos 666 was engineered, mixed, and mastered by Ryan Perras, and completed with cover art created by Seventh Bell Artwork.

With the unveiling of “Through The Devil’s Door,” Thangorodrim vocalist C.G. BloodCrown offers, “Chaos is the blood stream of the universe, darkness spreads in a single breath of mother serpent ushered in through the devil’s door.”

Decibel Magazine writes in part, “fans of classic occult rock like Coven, along with newer bands like The Oath, Lucifer, and Royal Thunder will enjoy the spooky and entrancing atmosphere created by Thangorodrim.”

Watch Thangorodrim’s “Through The Devil’s Door” visualizer first through Decibel Magazine now at THIS LOCATION.

Liberation In Unbound Chaos 666 will see release through Blood Blast Distribution on November 5th. Preorders, additional audio/visual singles, live dates, and much more are to be expected over the weeks ahead.

1. Through The Devil’s Door
2. Praise Be The Sound Of Suffering
3. Spell Of Confusion
4. Devour-er Ov Time
5. Cocaine Of The Multiverse
6. Thirst For The Bleeding Womb (B.S.M.)
7. Blood Of Anti-Kosmic Night
8. Santa Muerte
9. Father Of Flame
10. Hanged Are The Bones Of Love And Death
11. Infinite Dimensions Suspend Within

Having developed their sound naturally through the course of several independent releases – their eponymous debut EP in 2015, Soul Of Fire EP in 2016, and the “Time Is The Blood Of Death” single in 2017 – in 2018, THANGORODRIM signed an international management deal with New York based agency Extreme Management Group, joining iconic acts such as Suffocation, Cattle Decapitation, Misery Index, and Decrepit Birth on the agency roster.

In 2020, Thangorodrim entered District Recording Studio in their hometown of San Jose to summon and create their maiden full-length release, Liberation In Unbound Chaos 666 . With eleven spellbinding movements, the band delivers a massive record which beholds more than eighty-five minutes of “The Devil’s Rock N Roll.” The core members, bassist/guitarist S.K.B. and vocalist C.G. BloodCrown, were joined by drummer C. C. in the studio for the recording of Liberation In Unbound Chaos 666 .

The mission behind Thangorodrim is to pay homage to the Devil and bring chaos back to rock n’ roll. Prepare to witness the band’s testimony and worship.