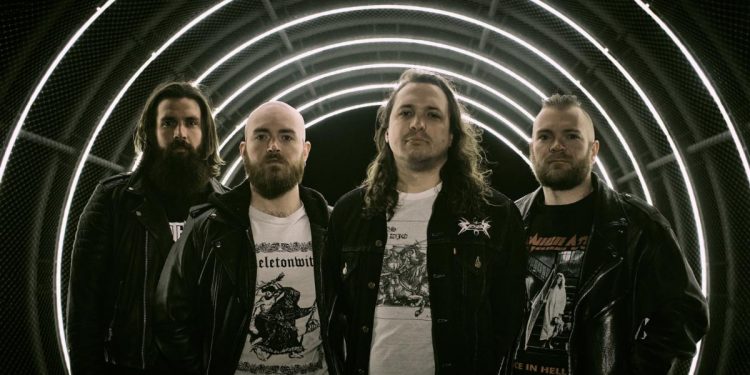 The world is ruled by speed. Speed which drives history forward in a state of ever-increasing acceleration. Such is the central claim of dromology; a theory of speed originated by French philosopher Paul Virilio (1932-2018). It is on this premise that Terminalist bases their conceptual universe. On The Great Acceleration, they bring the dromocratic philosophy together with their own science fiction narratives as they describe a world in crisis and a planet in collapse being abandoned in favor of colonization of space.

TERMINALIST uses the lens of dromology to describe the duality of technology and investigate Virilio’s thesis that the invention of the ship was also the invention of the shipwreck; continuing the thrash metal tradition of political criticism and pessimism about the future. Yet, the band’s output fits in among a new generation of metal bands using the genre’s monstrous sounds to illustrate the downfall of modern society in favor of something new and unknown. This is conveyed in a sound which is fast and aggressive, melodic, and dynamic; catchy yet technical.

The Great Acceleration was recorded and produced by Lasse Ballade (Konvent, Alkymist, Deiquisitor, Slægt, Orm) at Ballade Studios in Copenhagen during the summer of 2020, mastered by V. Santura (Triptykon, Dark Fortress) at Woodshed Studio in Germany, and completed with fascinating artwork created by Ryan T. Hancock.

Listen to Terminalist’s entire The Great Acceleration LP now at THIS LOCATION and watch the videos for “Relentless Alteration” HERE and “Terminal Dispatch” HERE.

The Great Acceleration is out now on LP limited to 300 copies on Black and 100 copies on Red vinyl, as well as cassette, and digital formats, available at the Indisciplinarian webshop HERE and through all digital providers including Bandcamp HERE.

“We like fast music around these parts and Terminalist certainly fit that description. The Danish thrashers look to the genre classics and update them, incorporating blast beats, death growls, modern production and concepts based around the theory of speed, coming full circle on new album The Great Acceleration. Those who like to delve into concepts will find plenty on The Great Acceleration, including explorations of the duality of technology and the disasters that followed its invention.” – Decibel Magazine

“ TERMINALIST are the sort of band who could pass many listeners by – in a warp-speed blur, probably. Thrash veterans looking for a true head-rush would do well to hand themselves over for The Great Acceleration’s half-hour of power, though. Just be sure to strap yourselves in for a wild ride.” – Kerrang

“The Great Acceleration hits the nail firmly on the head with a satisfying blend of accessibility and technical expertise that culminates in an exhilarating collection of tracks. The quartet have shown they are just as comfortable tackling tracks of considerable length as they are firing out pieces at the shorter end of the spectrum. If this is just the tip of the iceberg for Terminalist then they certainly have a very bright future ahead of them.” – Distorted Sound Magazine