Sons of Alpha Centauri Ink Deal with Exile On Mainstream 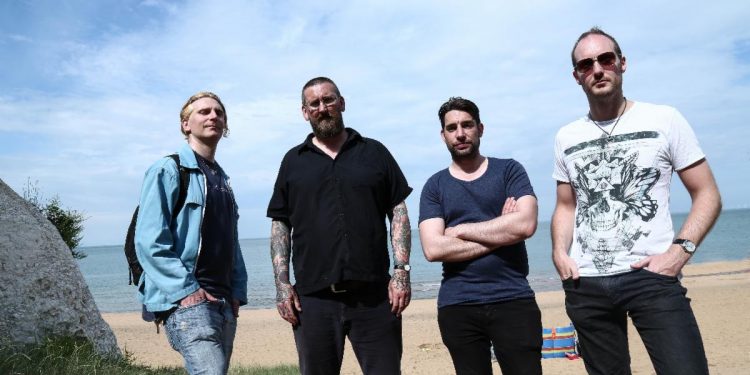 Sons of Alpha Centauri sign with Exile On Mainstream for the release of the UK-based alternative/post-hardcore quartet’s third album, Push. The lead single “Buried Under” has been premiered through BrooklynVegan and will be a radical departure from instrumental approach the band has maintained for the past twenty years. Push marks Sons of Alpha Centauri’s first collaboration with musicians from two of the biggest and most respected bands in the Sacramento music community, as the act welcomes Jonah Matranga of Far and Gratitude and Mitch Wheeler of Will Haven.

The follow-up to their previous album Continuum, Sons of Alpha Centauri’s Push is a powerhouse of searing post-hardcore, alternative metal, and progressive dreamy riff rock, with an ideology rooted in the ‘90s hardcore scene. The hypnotic pulsing riffs and the soaring emotional power of Matranga’s raw vocals provide his first heavy performance since the critically acclaimed Far reunion album At Night We Live . Push is an album that blends the instantly recognizable sonic landscape of Sons of Alpha Centauri with the emotional tone of Far and the epic backbone of Will Haven. Matranga uses his return to post-hardcore, and his subtle, almost subliminal delivery to challenge some of the core topics with a reignited fire of passion and emotional persuasion.

Push was recorded by Lance Jackman of EightFourSeven in Sacramento, engineered and mixed by Dan Lucas, and mastered by the legendary Nick Zampiello (Cave In, Converge, ISIS).

Founding bassist Nick Hannon offers, “SOAC has a split personality; this is most certainly our darker and heavier side. We grew up on ‘90s alternative rock and to harness our vision with the purveyors of the Sacramento post hardcore sound will make this a true landmark release and we have taken it to the extreme collaborating with Mitch and Jonah!”

On embracing the spirit of collaboration, Hannon continues, “We’ve always been interested in working in a collaborative manner, so despite the epidemic, we’ve continued building and expanding our spectrum of musical genres that we want to experiment with. This is an exciting phase for us and integrating the guys from Sacramento and their heritage is phenomenal. We have worked to sculpt the instrumental rock dexterity of SOAC and provided a hardcore backbone by integrating Mitch and Jonah that has breathed a whole new spirit into the vessel. It still has an element of mysticism but comes with a more direct connection to the audience.”

With their exclusive song premiere, BrooklynVegan writes, “The first taste of this new Jonah Matranga-fronted version of SOAC is ‘Buried Under,’ a dose of heavy, soaring post-hardcore that really sounds like it could be a new Far song, which is a very good thing to sound like.”

Tune in and stream Sons of Alpha Centauri’s “Buried Under” first only at BrooklynVegan RIGHT HERE.

Sons of Alpha Centauri sign with Exile On Mainstream

Exile On Mainstream will proudly release Push on all digital platforms and an LP/CD bundled package on August 27th. Find preorders HERE.

Formed in 2001, c has long been established as the UK’s original instrumental stalwarts. They released their atmospheric and progressive debut to acclaim in 2007 and since then proceeded to develop their instrumental approach having been accepted and adopted by instrumental luminaries Karma To Burn and Yawning Man. The band has released multiple split records, undertaken several collaborations, and toured extensively with Karma To Burn since 2009, and formed Yawning Sons with members of Yawning Man. The collaboration heralded involvement from Scott Reeder (Kyuss) and Wendy Rae Fowler (Queens Of The Stone Age) releasing several albums to critical acclaim in 2009 and 2021 both widely referred to as cult classics.

Sons of Alpha CentauriI returned in 2017 with their sophomore Continuum , produced and engineered by Aaron Harris of ISIS/Palms, and the sister release Buried Memories followed thereafter which was a remix collaboration album with Justin K. Broadrick of Godflesh/Jesu.