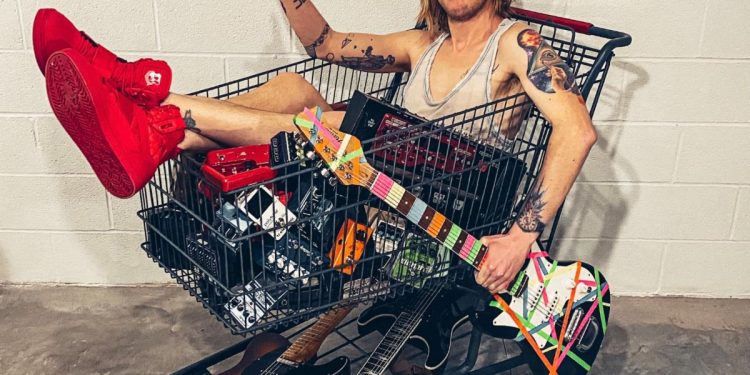 Get a preview of the track and its video today via BraveWords.

While they may be best known as Nashville, Tennessee’s “rock supergroup” with musicians from Taking Back Sunday, Insane Clown Posse and even Rodney Atkins. The First’s fiery new ode to the Covid-19 pandemic saw vocalist/producer Mikei Gray performing all 130+ tracks in the recording session entirely himself.

“I think this past year we’ve seen the death of small talk,” Gray says. “Hence ‘Small Talk’ was written as an analogy for these post pandemic times where human contact is all but extinct. While in quarantine I recorded over 130+ tracks in the recording session myself, although it was an old Digitech ‘Grunge’ distortion pedal that Adam Lazzara ( Taking Back Sunday ) gave me that really brought the guitar tones together and cutting through the mix. Steve Hardy deserves a lot of credit for wrangling all those tracks together. Of course, working with Andy VanDette is always incredible. He knows how to get the best out of a song.”

After a decade spent as a decorated live rock guitarist, sharing stages with artists spanning the width and breadth of the music industry, such as Portugal. The Man , Florida-Georgia Line and Sublime with Rome , singer/guitarist Gray had something different in mind when he started THE FRST in early 2017. Gray and his ever-rotating cast of accompanying Nashville music heroes (including Andrew Leahey, Nathan Cogan ( Taking Back Sunday ), Jeffrey Cashmere ( Insane Clown Posse ) and Justin Smith spent much of 2017 touring the entire eastern seaboard.

Since that time, The First has received international acclaim for a combination of driving guitars, pinpoint melodic injections and heart-on-sleeve lyricism, with “Ammo” peaking at #1 on the Soundcloud New & Hot Rock Chart (USA) and “Tarantino” reaching #1 on US FM Radio (KXFM) as well as #78 on the iTunes Top 100 Rock Songs Chart. Missing i Records’s debut album, Prelude, is available via Spotify and Apple Music.

THE FRST continues to push the envelope and stand out from the crowd at almost every juncture, be it with an original and enticing blend of influences from hard rock, pop and hip-hop or making history with their groundbreaking new Augmented Reality App that accompanied the single “Simulation.”

“Radiant backing harmonies imbue the tune with glowing depth and dimension, emphasizing the delicious sonic pressure of the song.” – Tattoo.com

The Other LA premiere Debut Single “Waiting On The Rain”