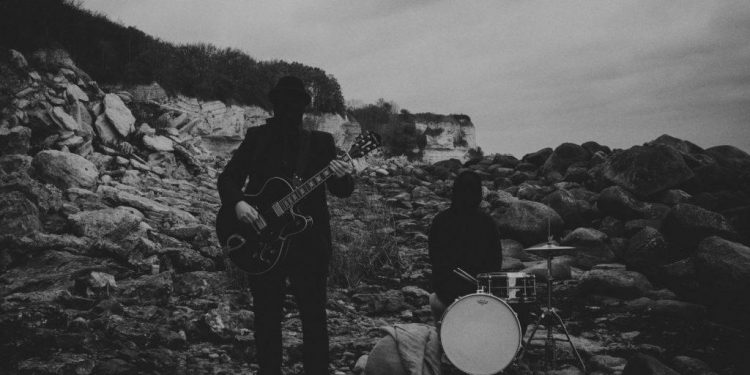 Skyggespil (Danish for “shadow play”) includes a variety of guest appearances from members of Soilwork, Finntroll, Kreator, Hypocrisy, DragonForce, Satyricon, and more. Imagine a blackened sound that claws at your very soul; a powerful, intense, swirling mass of energy emanating from your speakers, like the coming of the Four Horsemen of the Apocalypse heralding the end of the world. Except there’s only two of them, and they hail from Denmark.

In the latter part of 2019, ANGSTSKRÍG recorded Skyggespil at Hikikomori Studio with producer Frederik Brandt Jakobsen at the helm. It was by his hand that ANGSTSKRÍG’ s particular take on the Nordic sound took form. To furthermore give a very diverse album even more assorted flavors, the duo called upon a variety of gifted musical comrades to take part in the creation of Skyggespil thereby elevating the songs to new levels.

Yet, the story of ANGSTSKRÍG took its beginning decades earlier, sometime towards the end of the last millennium. From a young age, the two were taken under the wing of a common mentor, under who’s guidance they taught themselves how to play. How to perform. How to create. How to be artistically curious. How to express themselves. How to challenge boundaries and convictions. Although the steps in the very beginning were small, this marked the offset of the musical journey. Though life separated the two and took them down diverging paths, where one pursued the road of knowledge, the other a path of entertainment, they never lost touch, and the idea to reunite at some point remained prevalent. So, after gaining invaluable experiences and due to their respective directions in life taking new, dramatic turns, the time was ripe to create what would become ANGSTSKRÍG .

“…the band uses an infectious blend of second-wave black metal (especially Immortal and Nemesis Devina-era Satyricon) and classic heavy metal that punches hard but still maintains a cold, enveloping atmosphere. Composed of two permanent members, both remaining anonymous, the band has allied itself with various other musicians across the metal world to bring further shades of sonic nuance to the record.” – Decibel Magazine

“Succulently lavish tolling of bells give the tapestry of ‘Skyggespil’ undertones of gothic eeriness. A meandering guitar solo is birthed from the creepiness, the notes ringing like the maternal tones of the bells. An interruption of synapse stimulating drums leads to sinister singular guitar work, creating an aggressive undertow for where the resplendent bass line becomes to interim nidus…” – Freak on Skyggespil’s title track

“The song, ‘Lucifer Kalder,’ is a big rumbling juggernaut fueled by highly infectious guitar pulses and overlaid by scathing vocal vitriol. It becomes both more grim and more feverish, and as icing on the cake it’s capped by a spectacular, fret-melting solo courtesy of the band’s guest Frédéric Leclercq…” – No Clean Singing on “Lucifer Kalder”

The Other LA premiere Debut Single “Waiting On The Rain”

The Other LA premiere Debut Single "Waiting On The Rain"