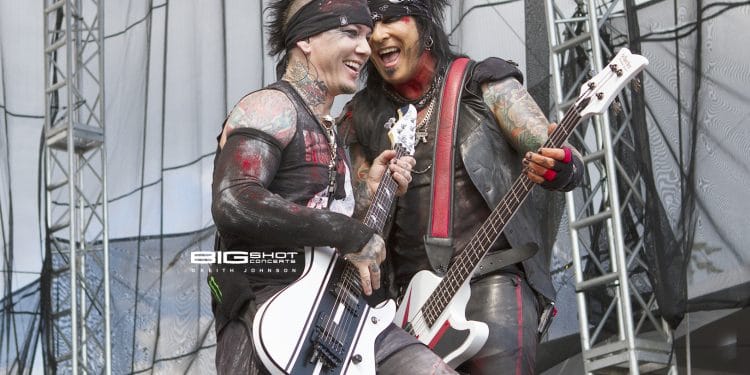 SIXX:A.M. HITS album has been released via Better Noise Music. The project celebrates the rock band’s biggest hits and fan-favorite songs. Five unheard tracks and mixes are also included, making this release the band’s first official album with new material since 2016. One of the new tracks on the album is “Waiting All My Life,” a coming of age story about falling in love, with love representing the next great adventure. The song captures the moment of impact, after you’ve been anticipating this life-changing transformation, and the band is celebrating the release with a brand new lyric video for the song which can be seen HERE. The album is now available across platforms HERE.

The album arrives three days after the highly-anticipated release of iconic Sixx:A.M. and Mötley Crüe founding member and music legend Nikki Sixx’s new memoir THE FIRST 21: How I Became Nikki Sixx (Hachette Books; 10/19/21; $30; ISBN: 9780306923708). The book is already getting acclaimed media coverage, with the LA Times writing, “Funny yet surprisingly moving memoir of a small-town kid figuring out who he wanted to be.” One of the brand new focus tracks included on the album is also titled “The First 21,” with the lyrics being inspired by the captivating content of the book, and the accompanying music video being made up of newly discovered home movie footage of Nikki Sixx and the band. Now in his 21st year of sobriety, Sixx is incredibly passionate about his craft and wonderfully open about his life in rock and roll, serving as a long-time advocate for expanding the support services for people in recovery from substance use disorder (SUD).

Nikki Sixx has given testimony on Capitol Hill, made frequent media appearances to discuss his experiences, and authored op-eds on the subject in major publications. In the memoir, Sixx, already a three-time New York Times best-selling author, tells the inspirational story of his first 21 years, how Frank Feranna became Nikki Sixx. He was an all-American kid—hunting, fishing, chasing girls, and playing football—but underneath it all, there was a burning desire for more, and that more was music. He eventually took a Greyhound bound for Hollywood. In Los Angeles, Frank lived with his aunt and his uncle—the president of Capitol Records—for a short time. But there was no easy path to the top. Frank honed his craft, forming a group of his own: London, the precursor of Mötley Crüe. Frank changed his name to Nikki London, Nikki Nine, and, finally, Nikki Sixx. Like Huck Finn with a stolen guitar, he had a vision: a group that combined punk, glam, and hard rock into the biggest, most theatrical and irresistible package the world had ever seen. With hard work, passion, and some luck, the vision manifested in reality— making for a profound true-life story of finding your identity, which fans have partly come to know through Mötley Crüe’s widely-celebrated collaborative autobiography The Dirt, most recently adapted into a hit biopic by Netflix in 2019.

The First 21 also continues Sixx’s tradition of setting the soundtrack to his own life, combining his work as a writer and a musician to offer multi-layered pieces of art. In 2007, Sixx:A.M. released The Heroin Diaries Soundtrack, which acts as a companion piece to Sixx’s best-selling memoir The Heroin Diaries: A Year in the Life of a Shattered Rock Star, released the same year, introducing the concept of a book soundtrack into popular culture. Both the book and the album were successes upon release, with the book instantly becoming a New York Times-best seller in its first week, selling out in bookstores around the U.S. The album spawned the #1 single “Life Is Beautiful,” while simultaneously receiving critical acclaim and eventually achieving Gold certification in the U.S. IGN praised its effectiveness as a concept album, writing, “[It’s] not really an album but rather a musical book. It is almost impossible to recommend any specific songs over others.” Expanding this artistic signature move by Sixx, The First 21 now has its own soundtrack with the HITS album.

The band is also celebrating their catalogue on Spotify, with the new “Sixx:A.M. 101 Playlist.” The playlist offers new and old fans a comprehensive collection of the band’s acclaimed catalogue. Stream it HERE. Nikki Sixx also curated a companion playlist to his book called “Nikki Sixx’s First 21 Playlist” which features the soundtrack to his formative years and is available for streaming HERE.

About SIXX:A.M.
It’s a universal truth that true artists will always busy themselves creating, and that truly great artists will always find an audience for that work. It is little surprise then that despite storied individual histories playing in and working with some of the most iconic bands ever to have walked the planet, Nikki Sixx, Dj Ashba and James Michael—collectively known as SIXX:A.M.— are set to unleash a collection of their hits featuring new material onto their forever loyal fan-base, that has already taken them firmly to their hearts.

Sixx:A.M., an American rock band from Los Angeles, California, formed in 2007, is best known for their #1 hits, “Life Is Beautiful” and “Lies of the Beautiful People”. The name Sixx:A.M. is a combination of all of the members’ last names (Sixx, Ashba, Michael).

SIXX:A.M. Hits is a collection of songs that will fire up both the head and heart in equal measure – a band who found their true sound and producing art that refuses to be led by anything but their own desires.

From the songwriting and musicianship to James Michael’s production and mixing and Dj Ashba’s captivating artwork, Sixx:A.M. have crafted a style in music as much of a mission statement for the band as it is an impassioned call to arms.

John Waite at The Parker in Ft. Lauderdale, Florida