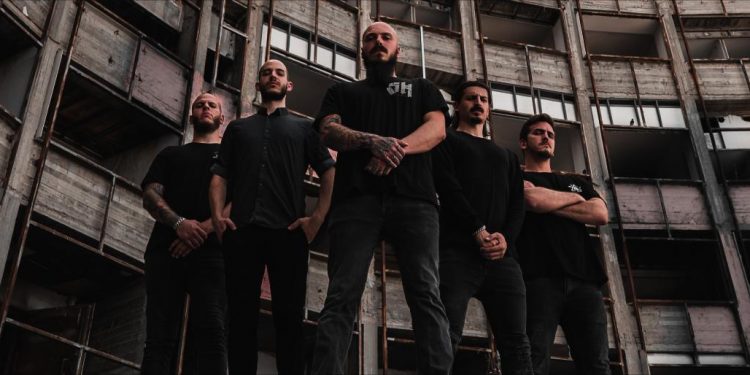 Shredhead return with a jarring single, “The Nothing We Are.” The track was recorded, mixed and mastered for Israeli metal outfit by acclaimed Danish producer Tue Madsen who also works with Meshuggah, The Haunted, Suicide Silence.

Shredhead Single “The Nothing We Are”

The new single comes as Shredhead announces a headline performance dubbed “Rise Up” on June 19 at one of Israel’s top venues, Zappa B-Side TLV club in Tel Aviv, with support from local artists Dukalaton , Matricide and DPS . “Everybody is naturally aching for a show, and we’ve felt like this is the perfect time to bring up our game and return to the stages with our biggest headline show to date,” says guitarist Razi Elbaz.

The hardworkingShredhead is a force to be reckoned with in Israel. Grinding their way to the top of Tel Aviv’s alternative scene with hundreds of domestic and international shows, including tours with Overkill, Crowbar and DevilDriver in Europe and Japan, packed local headline shows and official endorsement from metal guitar giants ESP, the band continues pushing forward with their new single.

“Everyone in the band is hyped about releasing this new single backed by a major ‘post-Covid’ comeback to the stages after this year and a half of a shitstorm,” says bassist Lee Lavy . “We can’t wait. All five of us are working around the clock to put on the best show that we can for our fans.”

The band is also hard at work on their next full-length album. “This release and the upcoming show feel like a breath of fresh air after a long time working hard behind the scenes,” guitarist Yotam Nagor says. “‘The Nothing We Are’ is just a first taste of much more material to come from the band. Stopping or slowing down is never an option for us, so during this time we’ve been busting our asses to bring forth new material. For now, we can say we’re at a very advanced stage in the production of our next title, and at this point it’s safe to say new material from the band is coming soon.”

Combining brute force with modern and relentless heaviness, Shredhead has been hailed as one of the top Israeli metal exports to date. The group has released three albums: Human Nature, Death is Righteous and Live Unholy . Live Unholy , released in 2019 via Legend Recordings, received over 10,000 streams on Spotify within its first week of release. On its release day, the album received placement on iTunes’ Featured and Best Sellers charts and peaked at number 40 on the Top 100 Metal Albums chart. Check out the official videos for “ Live Unholy ,” “ Overshadow ,” “ Unmarked ” and “ Burn Your Master.”