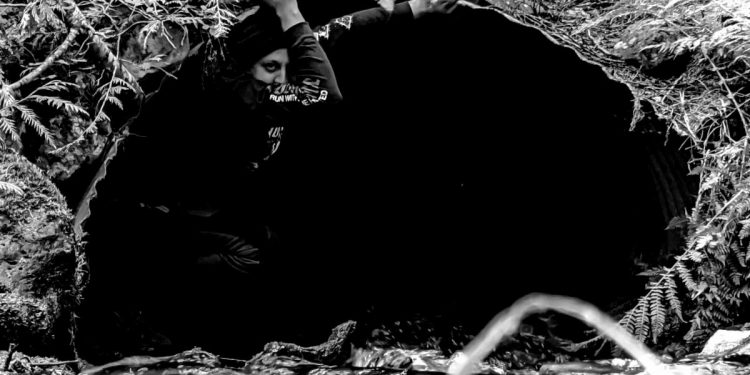 Scard Rusted Lock album is the latest full-length from the Portland-based dark ambient/industrial noise project. The record is out now and streaming via Scry Recordings.

J. Huston formed Scard in 2001 in Seattle before moving to Portland one year later. Drawing from dark ambient, power electronics, death industrial, and black noise, Scard unites personal origins in the forested regions of Oregon with the filth and chaos of city life to create a harsh, layered, and multi-faceted sound.

Stream in its entirety at THIS LOCATION.

Rusted Lock was mixed by Fester, mastered by James Plotkin, and is available on cassette and digital formats. For orders, go to THIS LOCATION.

“Rusted Lock contains the most seething, and incisive work since Scard’s inception,” notes Huston of his latest output. “The project is by nature experimental and includes exploratory sounds and songs but a consistent thread of death/industrial doom and black metal venom remains consistent throughout. This latest offering was an absolutely crucial album after a very long break from any activity. Near the end of the break, I underwent a total mental reconfiguration as well as a vast expansion of studio gear. The album evolved naturally throughout the process, utilizing a dominating force of will during a period of molting. It draws upon concepts surrounding personal strength, confrontation, obsession, and the many forms of poison, violently gripping, and tearing at its prey until cold, barren detritus is rejected and abandoned.”

Over the last nineteen years, Scard has shared stages with the likes of Sixes, Bloodyminded, Daniel Menche, Control, To End It All, The Rita, Wolf Eyes, John Wiese, Blue Sabbath Black Cheer, Sleeping With The Earth, Pharmakon, Dave Phillips, Sudden Infant, Consumer Electronics, and many others. SCARD has also appeared at 2007’s Black Noise Festival in Oakland, 2009’s Northeast Noise And Power Electronics Festival in Boston, 2012’s Pure Harsh Noise Worship in Portland, 2014’s Pent Up Fest in Seattle, and many DIY venues throughout the Pacific Northwest.

In addition to his solo endeavor, Huston is the guitarist, vocalist, and producer of the atmospheric black metal band Winter In The Blood and also appears on the avant-garde black metal ensemble L’Acephale’s Stahlhartes Gehäuse and self-titled full-lengths (2009 and 2019 respectively).

“The solo project led by J. Huston (Winter In The Blood, L’Acephale’s Stahlhartes Gehäuse) finds the soundtrack-eque tomes seeping into your brain and implanting feelings of dread into your psyche. Perfectly eerie and haunted, just in time for the spooky season…” – Ghost Cult on “Impenetrable Will”

“The shuddering rhythms feel grueling and soaked in viscous tension, with a decidedly angular and erratic texture to the oddly more danceable components. It’s as if more pleasant-sounding sonic ideas are getting run through a blender in real time across ‘Fire In The Veins’…” – Captured Howls on “Fire In The Veins”