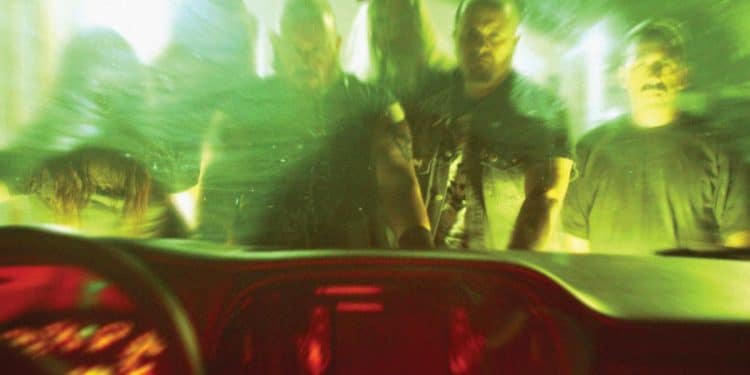 Ruin LP Spread Plague Death is the the decimating new release with Nameless Grave Records. The California-based death metal unit confirms the record for late August. Cover art, track listing, preorders, and the lead single, “Ornaments Of Flesh” are posted by the label.

RUIN was spewed forth in 1991 by Mihail Jason Satan (Dead Conspiracy, ex-Gravehill). Many band members came and went and after incarcerations, deaths, and disappearances, the band went on an extensive hiatus until 2015, when MJS decided to get this dismal and rotting corpse back up and ready to kill again. Former member Phobic One was on board to release the demo Spread Plague Hell on his label Nero One Records in 2015. Live assaults started that year, and the band has since released a massive number of EPs, splits with Violation Wound, Anarchus, Anthropic, Absconder, Anatomia, and more, and two full-length albums, Drown In Blood and Human Annihilation.

With MJS on vocals, the RUIN lineup currently is currently fleshed out with drummer D-Muerte (Aeternum, Oscuros, ex-Mictlantecuhtli), bassist Spine, and guitarists Carsten Brix (Destroyed in Seconds, ex-Gravehill) and Bodybag. 2021 sees the collective prepared to release the crushing blow if their third LP, Spread Plague Death . Packing thirteen tracks into the record, Spread Plague Death features additional assistance with soundscapes by Scott Lee Martin and Alex Allenruso. Recorded at Trench Studios by John Haddad and The Church Of Sacrifice by Carsten LaRoque in late 2020 and early 2021, with mixing handled by LaRoque at The Church Of Sacrifice as well as at the Ascension Falls Blk/Str Cabin at Apache Junction/Helican Gate, Spread Plague Death was mastered by Dan Randall at Mammoth Sound Mastering, and completed with original paintings by Janine Wunsch and photography by Carmen Canchola/CSGF and The Death Metal Cult.

Stream the first single from RUIN’s Spread Plague Death , “Ornaments Of Flesh,” now at THIS LOCATION.

Spread Plague Death will see release August 27th on 12” vinyl by Nameless Grave Records, on cassette through Nero One Records and Death Metal Cult, and on CD through Goat Throne Records. Find preorders for all formats HERE.