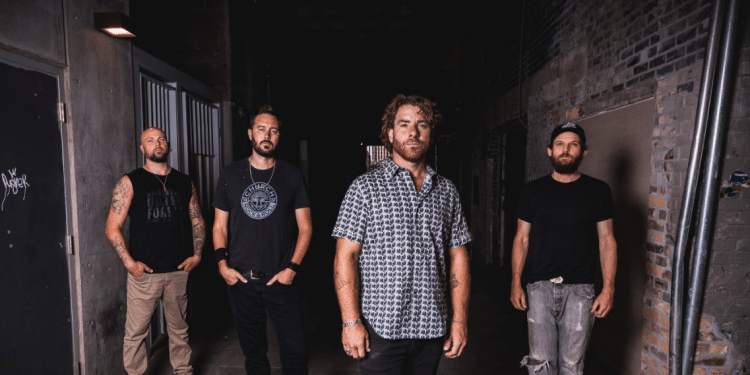 Royal Bliss video “Fire Within” is an explosive new music tune via EX1 Records/Explorer1 Music Group. This follows their Top 20 Billboard-charting single “Medication.”The tune serves as an anthem for anyone who has been told “no” and to conform. “Fire Within” is a rallying cry for everyone to unite and persevere against all odds together.

Keeping in theme with the unfaltering track, the music video features a number of characters — from a basketball player to a struggling musician to a photographer — learning to break free and out of the boxes they feel kept inside and find a way to light the ‘fire within.’ Also starring in the video is Royal Bliss frontman Neal Middleton who finds himself stuck inside a TV as he also finds the courage to leave all expectations and opinions behind him, much like the other characters in the video. With powerful and punchy imagery juxtaposed with evocative and empowering lyrics, the “Fire Within” music video is a cinematic & motivational wake-up call everyone needs post-2020 to unite together and achieve whatever it is you’re dreaming of.

Since the release of “Fire Within,” The Aquarian stated the track has “a flawless amalgamation of genuine professionalism, lifelong musicality, and irresistibly charming creativity […] the upbeat tempo alongside heartwarming lyrics and memorable guitar riffs that have a throaty reverb and garage band sound,” and Rolling Stone India listed Royal Bliss as one of their Global Artists and declared “Fire Within” as a song that “comes out all guns blazing […] from crunchy distorted guitars to a pulsating groove and soaring vocals, the track packs quite a punch.”

Speaking of the song, the band says “It’s for people who are struggling because they feel like an outcast compared to everybody else. As a band we’ve been told our dreams are unreachable, but you have to persevere. You have to light that fire within. Over the last year especially, so much has been brought to light — women’s rights, LGBTQ+, systemic racism. It’s about embracing our differences but knowing we all deserve to be treated equally.”

When the pandemic halted Royal Bliss’s extensive touring, the self-described “road warriors” used the time to reflect on their accomplishments as a band and what is happening around the world. The time away resulted in the band writing and recording some of their most honest, reflective, and unfaltering music to date. As the band prepares to release new music through the upcoming year, Royal Bliss’ biggest aim is to bring people together. “We hope it unites people from all walks of life, wherever they live, and hope they can connect to the songs,” Neal says. “More than anything, this music is about rising above and knowing that when we’re together, everything will be fine.”

About Royal Bliss
Since their formation, Royal Bliss has been a powerful force in rock music & there isn’t much they haven’t already accomplished — from signing with Capitol Records in 2009, garnering over 100 million streams and 175,000 monthly listeners on Spotify, charting on the Billboard Top 20 & hitting #1 in Billboard Heatseekers, touring with the likes of Kid Rock, Chevelle to Lynyrd Skynyrd, and having 10 singles break the top 50 on Active Rock radio. A band that prides themselves on their storytelling and ability to deftly blend classic rock with modern rock elements, Royal Bliss is a one-of-a-kind rock act and has the feverish fan following to prove it. Now, after thriving as an independent band, starting an exciting new partnership with EX1 Records/ Explorer1 Music Group, and seeing two of their latest singles hit the Top 20 Active Rock charts, the band known for persevering & surviving is more than ready for wherever this next chapter will take them.