The 2015 Revolver tour is fully loaded with bands from The Hottest Chicks in Hard Rock issue and is shooting across the country now through May 16. Shows at all stops will feature the talented and feisty frontwomen from Flyleaf, The Agonist, Fit for Rivals, Diamante and Falling for Scarlet.

Flyleaf
Multi-platinum band Flyleaf will be headlining the Revolver Tour. These Texas rockers began playing over a decade ago and have released four albums, including 2014’s Between the Stars. This smash record debuted at #1 on Billboard Top Current Alternative Albums and included the singles “Set Me On Fire” and “Thread.” Flyleaf’s style is a musical journey through alternative, metal, grunge and Christian genres.

Lead singer Kristen May had this to say: “I’m honored to be headlining the Revolver tour! Revolver has been a big supporter of rock music and I’m stoked to be a part of a tour celebrating female musicians.”

The Agonist
Touring in support of Eyes of Providence, The Agonist, along with new screamer, growler Vicky Psarakis, continues to prove that their live sets deserve to be lauded with praise like powerful, aggressive and diverse. No matter the venue, one thing is for sure — when this band binds with the fans, the response will be epic.

When asked what Vicky Psarakis thought about traveling with these great bands, she had this to say: “We’re so excited to finally announce this Awesome US tour! A huge thank you to Revolver Magazine for having us be a part of this great lineup. Come out and head bang with us, USA!”

Fit for Rivals
Floridians Fit for Rivals formed in 2008 and immediately began creating a buzz with their music. The band’s debut album, Steady Damage, was released in 2009 and included the track “Crush.” This song has been featured in a World Wrestling Entertainment PPV event, the movie Legend as well as a handful of television programs.

The mood of the group is decidedly enthusiastic as confirmed by lead singer Renee Phoenix: “Can’t wait to melt some faces on the Revolver Tour … get ready.”

Diamante
Being a dirty blonde is an attitude that teen rocker Diamante embraces — and this sassy lady is kicking ass, in a world dominated by men, with a vibrant yet edgy voice. Her self-written, chart-topping single “Bite Your Kiss” helped earn this 18 year old many accolades including Best Young Rock Artist, Best Rock Recording and the coveted Teen Artist of the Year.

A humble and grateful Diamante had this to say about playing with a bunch of female metallars: “I’m so honored and excited to be part of this tour! Can’t wait to hit the road with these amazingly talented chicks!”

Falling for Scarlet
Lee Tomaschefski has been a lot of things: actress, reality star and beauty queen. Now she’s a rocker fronting the band Falling for Scarlet on the Revolver Tour featuring the Hottest Chicks in Hard Rock. FFS gained a huge fan following when, in 2012, she and her bandmates bested 1,000 other groups to win the 99.3 CFOX Battle of the Bands competition in Canada.

“Being a part of this tour is not only a privilege, but a great opportunity for us to ‘tip our hats’ to some of our favorite bands,” Said Lee Tomaschefski. She continued: “We are coming all the way from the Great White North to help solidify the undeniable reasons why women rock! Time to stoke that fire, shall we!”

Don’t miss out on this great concert tour. Get your tickets at HottestChicksTour.com. Visit Big Shot Concerts for photos and review from the Fort Lauderdale concert. 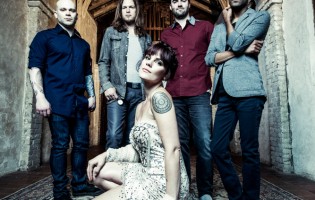 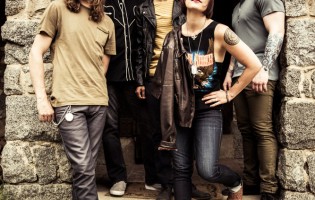