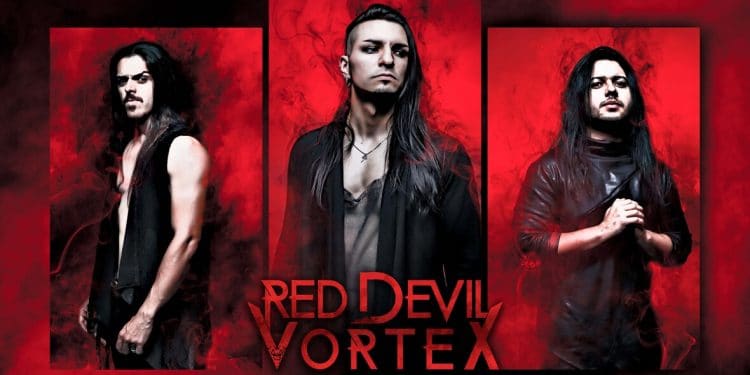 Red Devil Vortex song “Alive” ushers in a new era for the band, presenting guitar prodigy Luis Kalil as the new member. It’s a song of empowerment, about believing in yourself and being free to live on your own terms. After all the craziness and uncertainties brought by the Pandemic, we feel like this is a timeless message that fits the present moment perfectly, reminding us we can always be stronger and kick ass” says the band.

From living in an RV on the streets of Hollywood to #16 on the Billboard Charts, Red Devil Vortex is not only the sonic result of life’s chaos and frustrations, but a statement of fighting for what you believe in. Though adapting to a new world of cultural shocks and real life challenges when moving from Curitiba, Brazil to Los Angeles, CA, lead singer / bassist Gabriel Connor and drummer Iago Marcondes were relentless and just getting louder.

The band had its kickstart with the single “The Fallen” from 2016 followed by the EP Something Has To Die released in May of 2018. Produced by Augustus “Gus” Cryns (Butcher Babies, Anti-Flag), the EP hit the US Billboard charts on its first week at No #16 (Heatseekers Chart) and No #49 (Independent Albums Chart) with over 250k Spotify streams to date.

Between 2019 and 2020 the band went back in studio to record their second EP, facing the departure of original guitarist Pablo Kravicz during the process. Gabriel and Iago managed to finish the record before another loss with the untimely death of their friend and producer Augustus during the pandemic lockdowns.

All releases were postponed but Gabriel and Iago kept Red Devil Vortex alive, using the time to organically find the right guitarist to get back on track. That guy was Luis Kalil, a 21-year-old award winning guitar prodigy based in Los Angeles who is also from Brazil and has either recorded or performed with artists such as Steve Vai, Corey Taylor (Slipknot, Stone Sour), Kiko Loureiro & Dirk Verbeuren (Megadeth) among others.

With Luis onboard, his guitars were recorded in all the remaining tracks done with Augustus Cryns not only honoring the work they’ve done together before his passing but giving a new meaning and creating a new chapter in the history of Red Devil Vortex.

Dark Secrets, Red Devil Vortex’ new record, is set to be released in the second half of 2021.