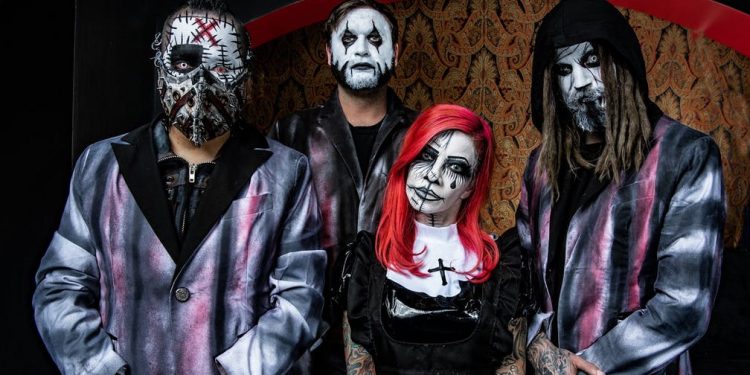 Theatrical metal band Raven Black has revealed a poignant new video for the song “Hear Me Cry,” from their upcoming third album, The Key.

“Hear Me Cry” made its debut along with a full feature in UK heavy music bible Kerrang.

“‘Hear Me Cry’ is about the chaotic and deeply disturbing thoughts when I once attempted suicide,” Raven explains. “The inner battle of wanting to give up and yet wanting to fight and change your own life. The personal psychosis and finally calling out for help, which ultimately saved my life. This song hopefully inspires those who struggle with suicidal thoughts to speak up and seek help. Someone is always ready to help. Suicide is not the answer. You can change your life and you can survive.”

A lyric video “Darkest Pit,” also from The Key, was recently released.

The Key, produced by Ulrich Wild (Static-X, White Zombie, Deftones ), is scheduled for release this year via WurmGroup. Prior to its cancellation due to COVID-19, Raven Black was slated to perform on the nearly two-month-long The In-Between Tour with In This Moment , Black Veil Brides and DED this spring.

Together since 2012, Raven Black has created a soundtrack to their own Dark Metal Carnival, releasing the 2016 EP Seven Sins and the 2018 album 13. The band has toured extensively, perfecting a creepy live show that unifies the visual and aural aspects of Raven Black.