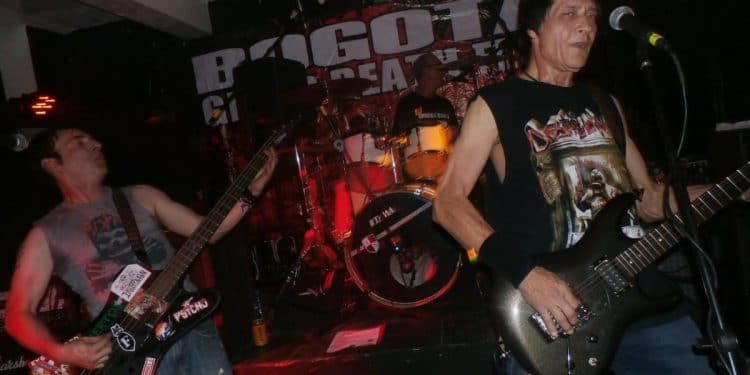 Celebrating forty years in existence, old-school Boston grindcore/punk act Psycho is back with their first new full-length in more than six years. Vulture Church. The album is confirmed for September release through Selfmadegod Records, who this week issues the record’s cover art, track listing, and more alongside a premiere of the title track, now playing exclusively at Decibel Magazine.

New England scene veterans Psycho present Vulture Church , the band’s fifth album amidst an extensive discography, and their second album released through Selfmadegod Records. Vulture Church rages with the band’s rapid and furious punk-infused grindcore mayhem, deploying eighteen tracks in under thirty-four minutes. The album was recorded at Lowell Street Studios Peabody, Massachusetts between February 2019 and February 2021, engineered, mixed, and mastered by Tom Hamilton, and completed with artwork by Corpz.

The lead single advancing the album is its title track, for which Psycho’s Charlie Infection writes, “‘Vulture Church’ is about a church we went to in Lima, Peru. It was an older church in total disrepair; the walls were blown out and it was so worn down and abandoned that some local vultures had taken over the church!”

Decibel writes with their premiere of the track, “‘Vulture Church’ leads with a lengthy sample before jumping into lurching, punk-influenced grindcore. There’s a decidedly old-school feel to the song and album thanks to the mid-paced music and harsh vocal delivery.”

Selfmadegod Records will release Vulture Church on CD and digital platforms on September 24th. Stand by for preorders, additional audio previews, and more to post over the weeks ahead.

Psycho has been shredding their way through the population since 1981. Formed as a punk band, the material simply grew faster and more extreme until it became the high-speed grind/thrash mutation their extensive discography of EPs, splits and albums reflects, never following current trends nor trying to make it sound technical. The band’s discography stretches back to 1982 with the release of their debut 12″ 8 Song EP . One year later they released Son Of 8 Song EP , three years later the debut LP, Hosebags From Hell , and two years later the follow-up You Love Us… You Hate Us… LP. Several EPs and splits with Anal Cunt, Agathocles, Meat Shits, Out Cold, Rot, Nasum, and more would drop throughout the ’90s. After a twelve-year stretch of silence, in 2008 Psycho released a double LP collection of early studio recordings as well as an eponymous CD/DVD. Selfmadegod released The Grind Years compilation CD in 2010, after which the band dropped two limited 7″ EPs before setting up to record their first new LP in over two decades, Chainsaw Priest, released through Selfmadegod in 2014. Having released several vinyl-only titles over the years since, Psycho is now back with their fifth full-length album, Vulture Church.