The appropriately named Michigan Madness concert starring Pop Evil took place on November 21, 2015, during the Great Lakes State’s first major snow storm of the season. But the wintry conditions did little to stop the fans from packing the Royal Oak Music Theatre to party with the band from Grand Rapids. Everyone was definitely looking for “Ways To Get High” — and they came ready to rock.

Touring in support of their fourth album, UP, Pop Evil started the night by making a “Deal With The Devil” that included playing tracks from their hit-filled catalog of tunes.

Frontman Leigh Kakaty demonstrated incredible vocal range during the Pop Evil concert in Royal Oak, Michigan. The lead singer went from melodic to gritty; then powerful and sedate. He was right at home on stage and captivated the audience with every new song he sang. His love for performing live shined through and every fan in the venue felt his enthusiasm.

Ax men Davey Grahs and Nick Fuelling delivered a double dose of grooving, screaming and wailing guitar riffs. Their fancy fret work cut through the crowd with raucous chords and loud leads as they traded licks on their six strings. It was a classic Pop Evil concert experience.

Pop Evil’s rhythm section proved that they’re musical masters at keeping the beat and holding down the low end. Wild man Chachi Riot reaffirmed the fact that he continues to have good hair days while being a blur behind his drum kit. He was in constant motion throughout the entire set, and it seemed the laws of gravity did not apply to his long dark locks. Chachi’s hair bounced up and remained vertical as his arms flailed across his drums with timekeeping precision. Matt DiRito’s slender stature was the perfect complement to his heavy handed thumping and pounding of his bass. He worked the stage from left to right and back to front.

Despite the snow and nasty weather conditions swirling around outside, the inside was all about the rock concert. And Pop Evil played until the “Last Man Standing” was ready to leave. That of course, was the entire audience. It was pure Michigan Madness.

Big Shot Concerts was on hand to provide live music photography and review the Pop Evil concert at the Royal Oak Music Theatre. 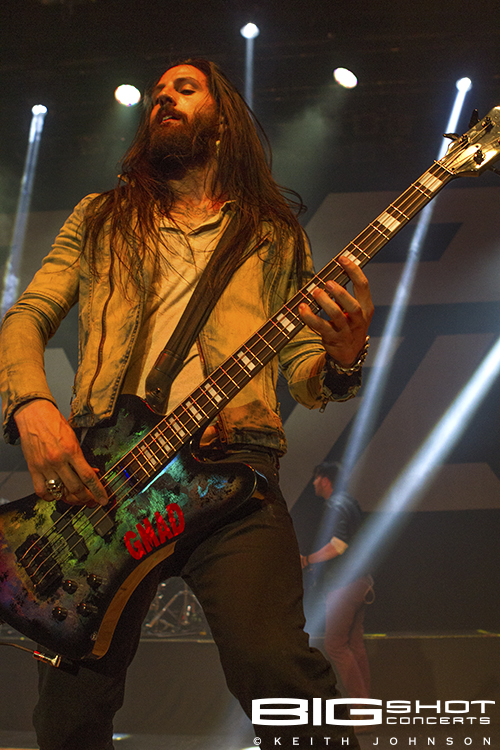