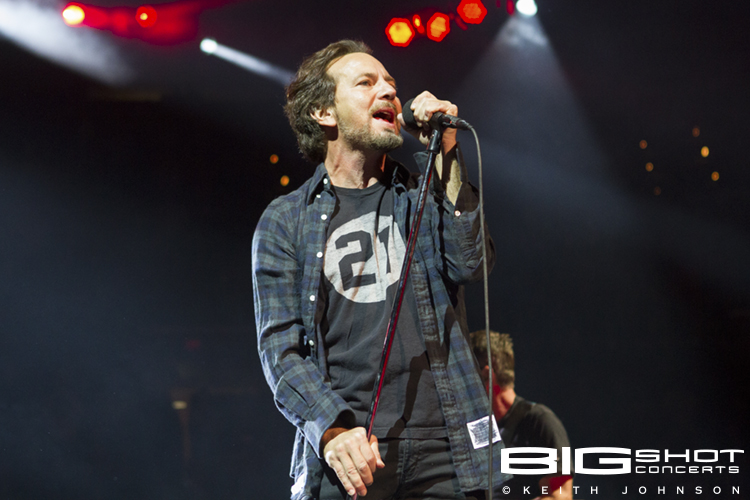 Pearl Jam kicked off their North American Tour 2016 on April 8 at the BB&T Center in Sunrise, Florida. As the lights dimmed, the band bounded on stage to thunderous approval from the sell-out crowd. And with good reason — the guys had never played this venue before. The concert also celebrated the group’s first return to the area in 20 years.

The alternative rockers from the Seattle grunge movement began with the aptly named “Go.” Opening with such a lively song served as a reminder that the now 50-something musicians still can play with plenty of rebellious attitude. They’ve also rebelled against swapping out band members. Since 1990, Pearl Jam has remained four familiar faces: Eddie Vedder (lead vocals), Mike McCready (lead guitar), Stone Gossard (rhythm guitar), Jeff Ament (bass). Longtime drummer Matt Cameron of Soundgarden is considered the fifth permanent member of the band. Touring/session player Boom Gaspar assumed his role as piano player during the show.

At the conclusion of “Elderly Woman Behind the Counter in a Small Town,” the band’s eighth song, Eddie Vedder raised a bottle of wine. He apologized for bringing only one, admitting there would have been more to go around had he known the turnout for the concert would have been so good. The singer then regaled the crowd with a story about seeing faces in the tiles of a hotel bathroom. He noted that those faces seemed to be judging him, and blamed the flavor crystals in his toothpaste for the episode. As a word of caution, he warned the audience not to leave their drinks unattended.

Loyal Pearl Jam fans know that Eddie has always been somewhat of a daredevil. Back in the day, it wasn’t uncommon to see him leaping off lighting rigs and flying from girders. He still likes to get air, but these days, leaps are from the floor of the stage to more sensible heights just above the monitors. This reserved approach to performing live must make Mike McCready very happy, as he once feared EV would come crashing down and send the band into early retirement. Mike recently turned the big 5 – 0 and Ed told everyone in the audience. They showed some love to the riff master by singing happy birthday to him.

The band rocked out 26 songs before the first encore break. They came back with even more energy and Eddie Vedder went into the crowd to get up close and personal with the fans. He even handed out souvenir guitar picks to a few lucky female concert goers. After seven additional songs, the band broke for encore number two.

Pearl Jam loves its fans, that is undeniable. They also love their crew and consider them part of the family. So it was with much sadness that they announced the passing of crew member Tim “Skully” Quinlan. The veteran guitar tech died earlier that day and they dedicated “Light Years” to his wife, children and memory.

With two encores of six songs or more during opening night, the band raised the bar pretty high for the rest of the tour. In all, Pearl Jam treated the fans to nearly three hours of live music.

Go
Mind Your Manner
Corduroy
Given to Fly
Help, Help
Deep
Nothingman
Elderly Woman Behind the Counter in a Small Town
Severed Hand
Unthought Known
Sirens
Surrender (Cheap Trick cover)
Evenflow
Amongst the Waves
I Am Mine
Swallowed Whole
Who You Are
Do the Evolution
Why Go 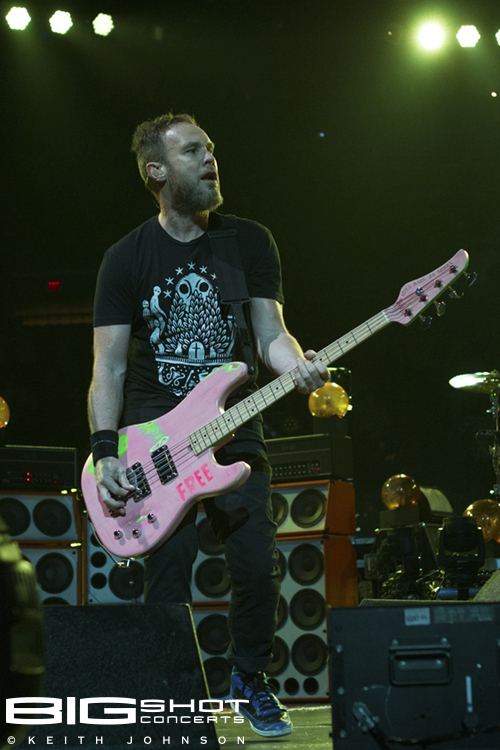 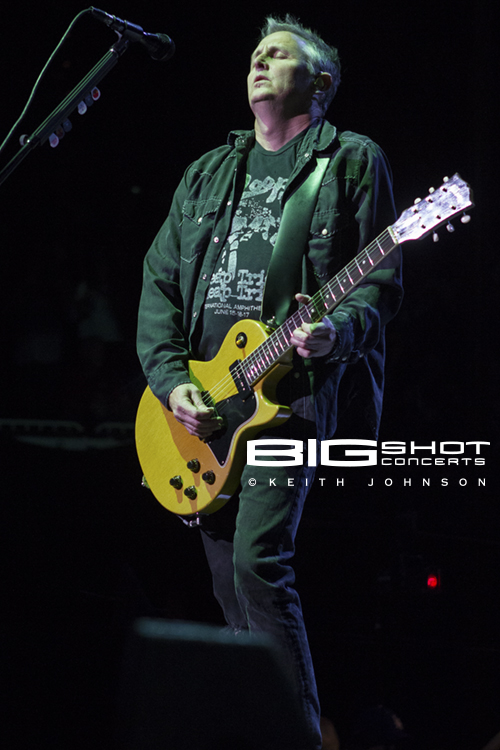 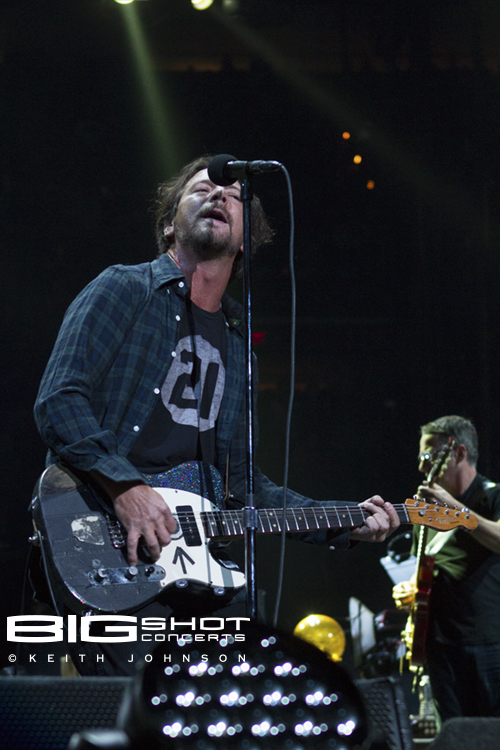 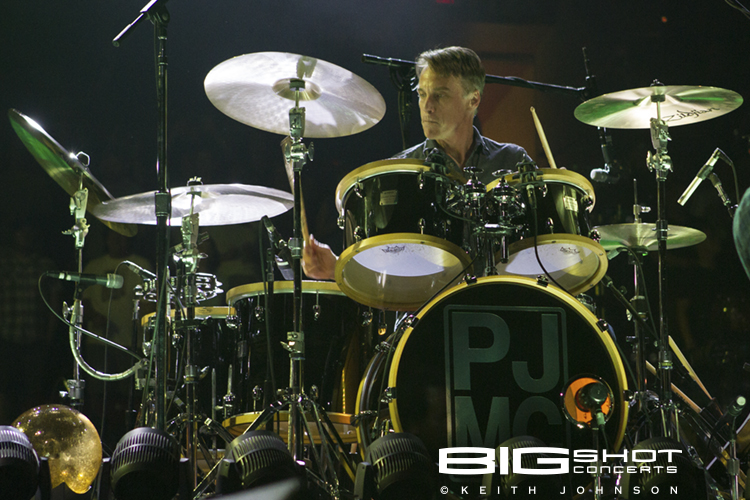 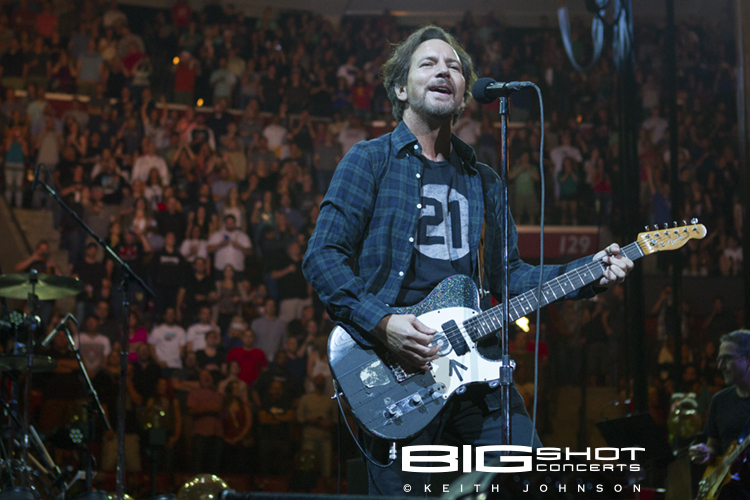 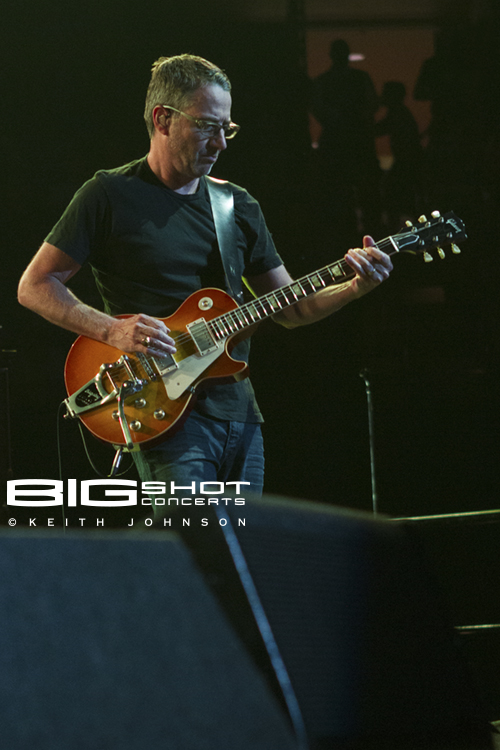 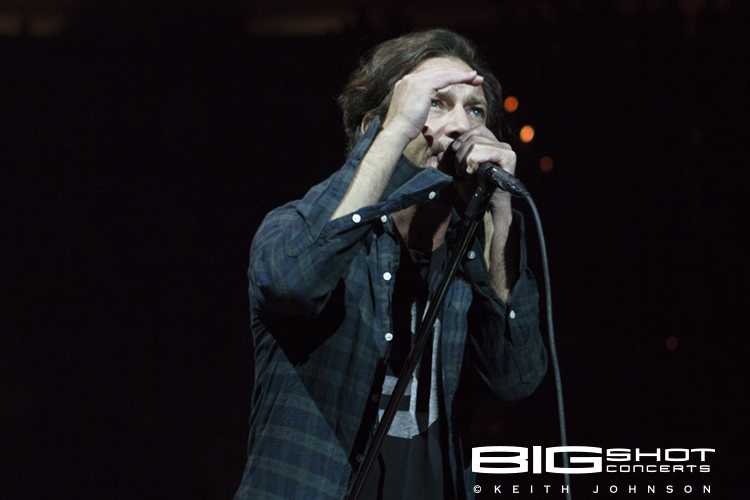 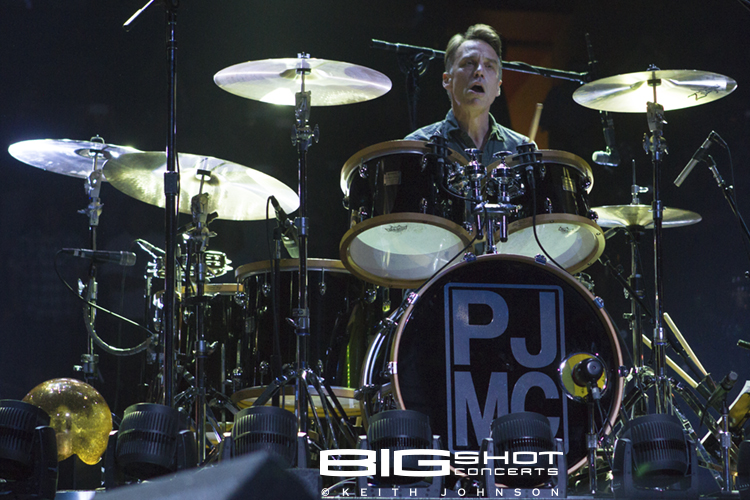 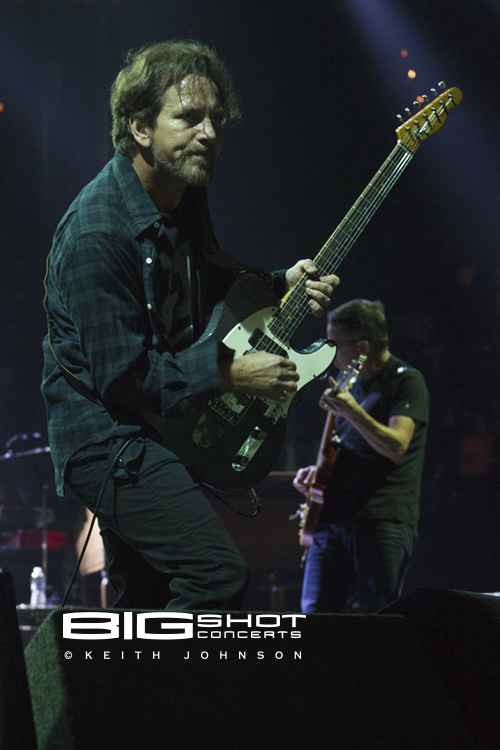 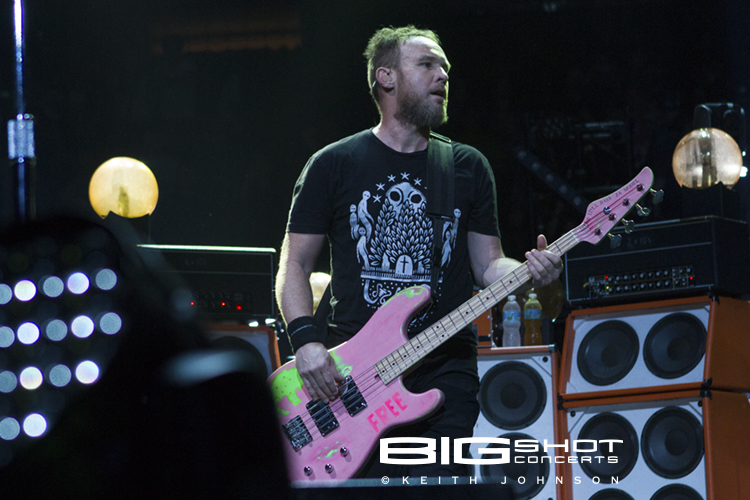 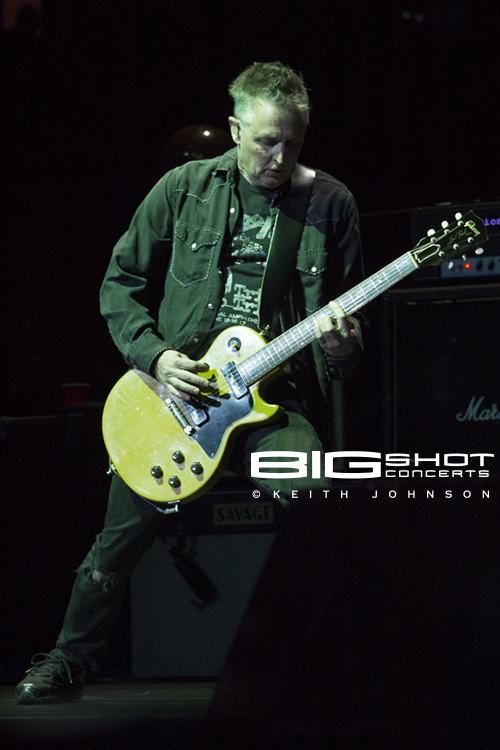 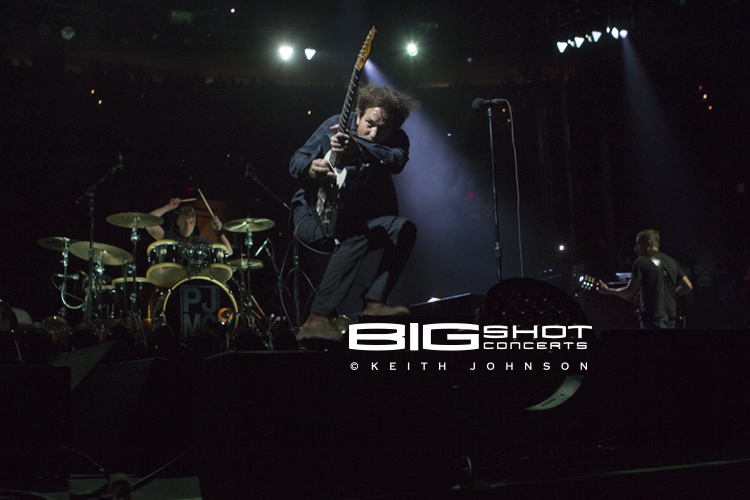 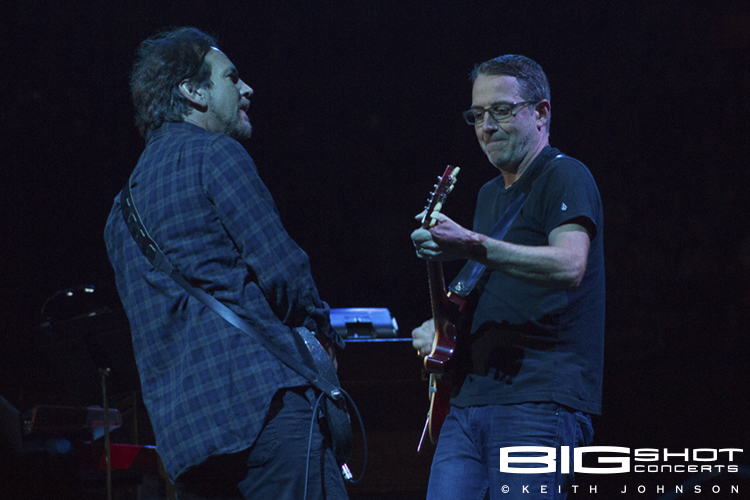 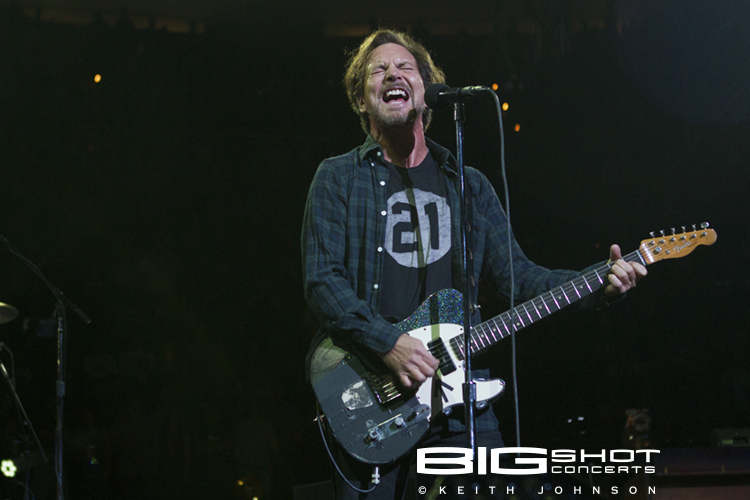