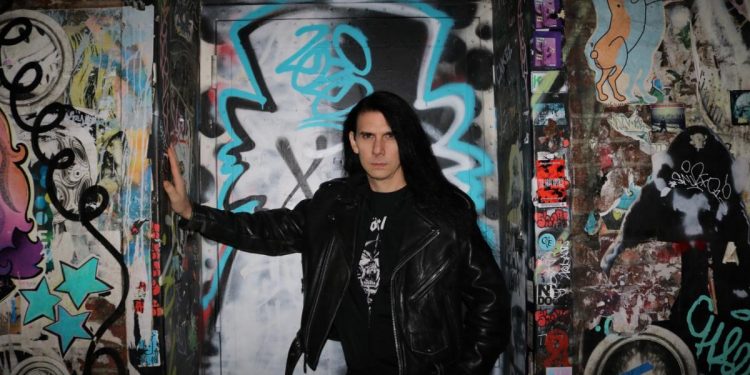 The playthrough is available now via Ultimate Guitar at https://www.ultimate-guitar.com/news/upcoming_releases/ug_exclusive_premiere_ex-cro-mags_guitarist_parris_mayhew_playing_chaos_magic_song_by_his_new_project_aggros.html.

The “Chaos Magic” playthrough is heavier on bass than the original track, a decision Mayhew made because the song was primarily written on the bass with a heavy emphasis on his unusual percussive and rhythmic strumming style.

“I felt that the bass perspective would be a way to show more comprehensively where the song originated and how it was built,” the former Cro-Mags songwriter and founder says. “Hearing the bass a little louder demonstrates clearly where the swagger that the song exhibits comes from, underlining the aggressive string bend melodies and percussive riffs that define the drums and outline the chords.”

The result is loud and raw but shows a kind of surgical finesse in the midst of the chaos, which is necessary to hold it all together.

Mayhew unveiled AGGROS with a video for the track in October. Fans who are accustomed to a big rock production sound from Mayhew’s guitar sound and production will find that “Chaos Magic” is more streamlined and rawer. The song was recorded live in one afternoon with little or no punches and feels alive and human, without today’s modern digital stiffness, just a balls-out rocker.

“Chaos Magic” is certainly a guitar song too, exhibiting casual chord harmonies that brighten and exaggerate phrase resolutions, off the rails WTF riffs and Mayhew’s signature Cro-Mags picking style which helped define a genre with his songs on the seminal albums Age of Quarrel and Best Wishes .

“I believe that a song should be a journey, there should be a clear introduction to set up the listener for the ride, and a ceremonious feeling of arrival at a destination to be experienced and a few musical surprises along the way,” Mayhew said. “And of course all great songs should have a feeling that the journey is complete, the catharsis, a lesson I learned from both Motörhead and Rush. Motörhead, particularly, in that within their deceptively simple approach there always comes a thoughtful, surprising and very musical ending, songs should have great endings.”

AGGROS will release music in a true DIY hardcore style – no label, self-releasing one song at a time, accompanied by a video for each. The music will sound and feel familiar to anyone who knows Mayhew’s previous three albums, as AGGROS is simply a continuation of his musical exploration.