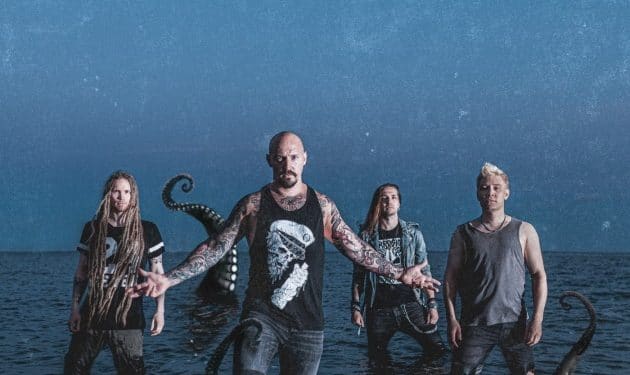 Oceanhorse debut studio album Dead Reckoning is the highly anticipated release from the Helsinki-based heavy metal band. Featuring 13 tracks loaded with crushing riffs, vocal harmonies and high voltage arrangements, Dead Reckoning shows a group willing to explore things in their very own style, instead of sticking to any kind of average formula.

After the previously- released singles “One With The Gun” and “Reaching Skywards,” today Oceanhorse have released a brand new lyric video for the track “The Damage.” If you’re a fan of Machine Head, Megadeth and other riff-oriented metal masters but still got a secret crush for Alice in Chains or Avenged Sevenfold -type melodic choruses, you don’t want to miss this!

Check out the video for “The Damage”

“The Damage” is a heavy metal anthem that begins with a moody guitar intro followed by haunting vocals. Then, the song takes a sudden U-turn and drags you in the middle of a metal mayhem filled with some lightning fast drumming! The Alice in Chains style wailing vocal harmonies and the song’s epic closure with harmonized guitars ultimately leads us to the punchline: ‘The damage is done.” the band comments.

Dead Reckoning, the group’s first studio album (Oceanhoarse released a live album The Damage is Done – LIVE! last year, recorded on their first European tour) will be released on August 20th through Noble Demon and is now available for pre-save and pre-order HERE