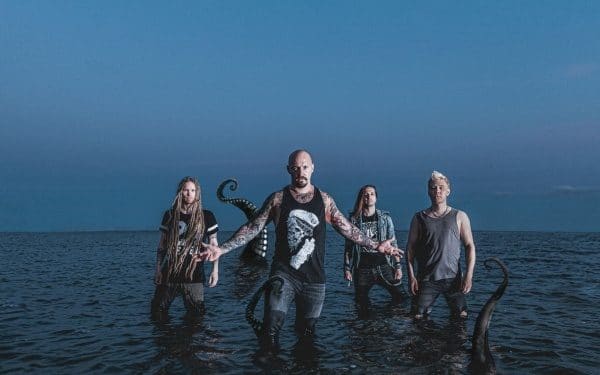 Oceanhoarse, the four-piece heavy metal outfit from Helsinki, Finland, has been operating for a couple of years with a relentless self-made attitude releasing a bunch of singles, an EP Voluntary Bends in 2019 and a live album The Damage is Done – LIVE! in 2020. The year 2021 sees the band moving up a gear with the German label Noble Demon. The brand new single “One with the Gun” displays the band’s love for vocal harmonies and crushing riffs accompanied with a strong message.

Listen to “One with the Gun” here:

“‘One with the Gun’ is about the twisted power trip some people seem to be on once they get a piece. There are constantly horrific news about the consequences of that ”I am the law” attitude happening all over the world way too often. So the statement the song makes is clearly really anti-violent even though the title sounds pretty menacing when you first look at it”, bass player Jyri Helko comments and continues:

“We are really thrilled to start working with Noble Demon! The German label is a new player in the game, but the people behind it have a strong background in the industry and they’ve already managed to build quite an impressive roster around the up-and-coming acts like Mercury Circle and the newly activated Dawn of Solace. We are currently starting the recordings of our first full-length studio album scheduled to be released this fall, so get ready for some Heavy F*cking Metal from Finland!”

The yet untitled debut studio album is scheduled to be released in August 2021 via Noble Demon. Having played shows all the way from Tokyo with Beast in Black to Central Europe supporting former Nightwish singer-bassist Marko Hietala, the band’s reputation as a strong live act can be witnessed with these domestic shows booked later this year (dates may be subject to change):

“One With The Gun”, the brand new single by Oceanhoarse, now available on
all DIGITAL PLATFORMS

All My Faith Lost... Set to Release New Album After 11 Year Hiatus