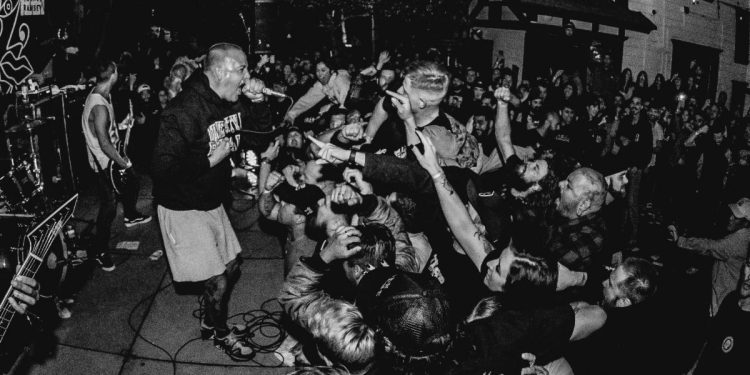 The new album from Terror is titled Trapped In A World. The long-running Los Angeles hardcore outfit is revisiting their earliest records with former guitarist Todd Jones of Nails, who will also be producing the band’s next LP. Set for release on March 5th, the band has issued the details on the special release including pressing info, preorders, and more, and No Echo is hosting a premiere of “Overcome.”

Since their 2002 inception, Terror has held their own at the forefront of hardcore, through nonstop international touring, an incredible discography, and deep roots in the hardcore community. While their full-time touring has been halted for the past year during the ongoing pandemic, the band has been revisiting material from some of their prior incarnations, and in recent months, the current lineup met up to recapture songs from their earliest days. Joined by former guitarist Todd Jones, who formed Nails upon his exit from the band in 2004, at drummer Nick Jett’s studio. The band recorded a brutal session of songs from their seminal first two records – 2003’s Lowest Of The Low (Bridge 9 Records) and 2004’s One With The Underdogs (Trustkill) – the session also serving as a precursor for their upcoming studio album which will be produced by Jones.

Vocalist Scott Vogel reveals, “As the world locked down and terror went on a full pause with the pandemic hitting the USA hard, somehow this created a perfect opportunity with Nick, Todd, and myself to start writing TERROR songs twenty years after we started this band. Of course, all the other members are involved in this process, but with travel restrictions and us being so spread-out location-wise, a lot of weekends the three of us were just getting in a room and creating new terror songs and it’s been a pretty insane experience. Todd is a deep-thinking maniac that can write hardcore songs like no one I have seen before, and the three of us fell right back into our early mindset and the energy and aggression felt just like it did on day one.”

Todd Jones adds, “Got together with the Terror Crew (in a creative sense), for the first time since recording One With The Underdogs. The ideas, guitars, lyrics/vocals, songs came pouring out. Locked in with Nick and Scott as if it hasn’t been sixteen years since we played together. There’s no shortage of song writers in Terror and the stuff we’ve collectively come up with so far… I can’t stop listening to these tracks. Magic via musical chemistry. It’s our aim to deliver to you a visceral and explosive hardcore record and I really hope you enjoy it.”

With twelve of their most seminal and foundational tracks brutally delivered in less than twenty-four minutes, Trapped In A World was recorded with the band all playing together at once to capture a more raw and “rehearsal tape” type of energy in July 2020 at Jet to Mars Studio, engineered and mixed by Nick Jett with additional engineering by Ryan Marr, and mastered by Will Putney. The record is completed with cover art by Rico Pakun with additional art by Chase Mason, handwritten elements by Tyler Mullen, layout and design by Martin Stewart.

Stream the Trapped In A World track “Overcome” at No Echo RIGHT HERE and find preorders and much more now at TERROR’s official StickTight.LA.

TERROR will self-release Trapped In A World on all digital service providers and on 12″ vinyl including new merch and more on March 5th. The LP will be pressed in an array of vinyl variants: 500 TriColor Pink/Blue/Yellow, 200 Black vinyl big hole limited cover, 25 Test pressings, 200 Gold Vinyl (Coretex exclusive), 200 Neon Yellow (RevHQ exclusive), and 100 Glow in the Dark with Japanese OBI Strip (WAR Records Exclusive).

Watch for new details on Terror’s upcoming, yet unnamed, new LP with Todd Jones at the production desk to be issued later this year.

New Album from Terror Trapped In A World Track Listing