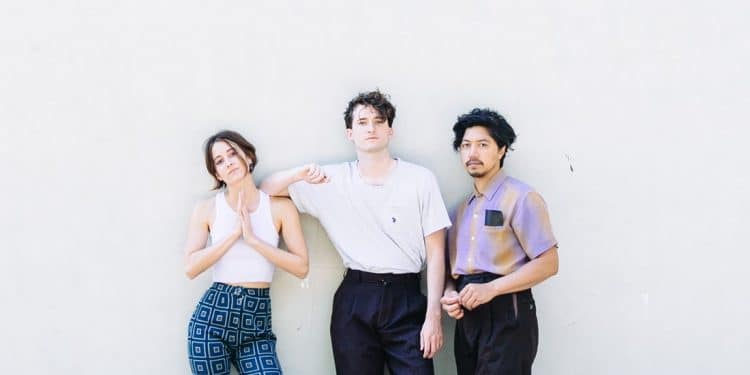 Nation of Language album A Way Forward is et for release November 5, 2021. The sophomore record will be supported by the band’s inaugural headlining tour of North America.

returned last month with “Across That Fine Line,” announcing their sophomore album, A Way Forward, for a November 5 release, along with their first ever headlining tour of North America. Today, the Brooklyn trio share the “Wounds of Love,” about feeling directionless after an emotional breakup. Along with the additions of second New York City and Chicago dates, the move to a larger venue in Seattle, and Levitation in Austin, Nation of Language announce a Winter 2022 tour of the UK and EU [all dates below]. Share the “Wounds of Love” lyric video via YouTube. Pre-order A Way Forward on vinyl here.

“‘Wounds of Love’ is a song about getting caught in a mental feedback loop when a relationship ends,” notes songwriter Ian Devaney. “It’s an endless inner argument – wanting to move on defiantly, but feeling utterly lost about how to do it when the other person has informed so much about how you see yourself. For every bit of progress there’s just as much retreating, and eventually it seems like this back-and-forth becomes the new root of your identity — still tied to the same person, just without them actually being there.

During its creation, the song was really born out of the main riff – I was experimenting with synth sounds and delay pedals, trying to find something that felt kind of like ‘Man Machine’-era Kraftwerk, and this simple melody just flowed out. At first the urge was to go very robotic with it, but a laid-back groove fell into place and gave everything a really warm, spacey, stoned feeling, which felt like it amplified the emotional haze that the song deals with.”

“Later, when it came time to make a visual to accompany the song, the aim was to capture some of the ways people attempt to navigate moving past those major heartbreaks,” continues Devaney. “Throwing oneself into tactile tasks seemed like a fitting arena to explore. To watch someone quietly working a craft with their hands, taking their time and allowing themselves to focus in a way that hopefully quiets the mind and blocks everything else out can be incredibly calming and hypnotic. Whether at a professional level or just channeling energy into a personal hobby, there’s a lot of power in having a pursuit that requires attention and finesse. Tying that profound, resilient kind of calm to the song in a way that is not so present within the lyrics feels like a great companion to the track itself – adding a glimpse of a way out of the feedback.”

A Way Forward is the follow up to Nation of Language’s highly acclaimed debut album, Introduction, Presence, released in 2020 during the early stages of COVID’s merciless mayhem. Unable to promote the album in any traditional live sense, the record grew through a flurry of rave reviews and airplay from radio stations around the world, ultimately landing on year-end ‘Best of’ lists from Rough Trade, Stereogum, Paste, Under The Radar, and the NME.

With the pandemic putting so much on hold, Nation of Language (Devaney, with keyboardist Aidan Noell and bassist Michael Sue-Poi), decided to forge ahead and begin work on what would become A Way Forward. While much of the sounds on Introduction, Presence garnered comparisons to the synth-punk sound of the 80’s, with this new set of songs the band delved heavily into the Krautrock pioneers and electronic experimentalists of the 70’s for inspiration in the studio, stretching their boundaries in new and different ways. Production on the record was divided between Abe Seiferth (who worked on Introduction, Presence) and Nick Milhiser of Holy Ghost!

Connect with Nation of Language: