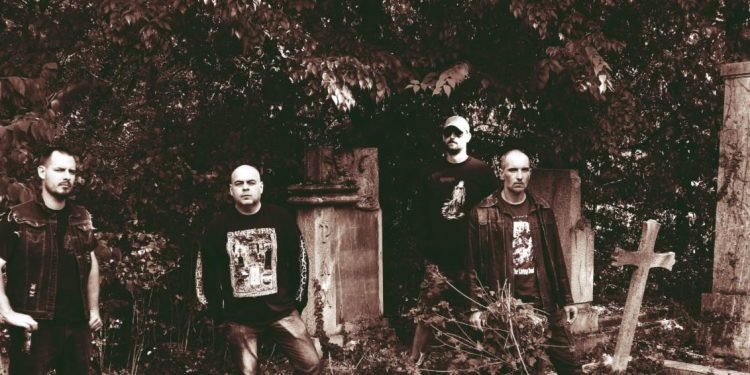 Hungarian death bringers Memphetic Grave will unleash their Into The Atrium Of Inhuman Morbidity debut via Carbonized Records this May.

Made of jagged riffs and grisly vocal incantations, Memphetic Grave’s sonic venom — influenced by Abhorrence, Funebre, and Autopsy among others — runs deep discharging eight maniacally putrid odes of lo-fi grimness. Tipping their scythes to the works of H.P. Lovecraft, the band’s visual and lyrical concepts revolve around the philosophy of cosmicism which denies the presence of a god or any such ideas of divinity and upholds that humans are insignificant in the face of an incomprehensibly large cosmos.

Into The Atrium Of Inhuman Morbidity was fittingly recorded, mixed, and mastered in the age of plague and pandemic lockdown by guitarist Knot in his basement workshop and includes cover art by Raul Gonzalez.

In advance of the record’s release, the band is pleased to unsheathe “Chthonicon” commenting of the track, “Diving into the chaotic dimension of one’s deepest nightmares, a vision of living hell… the powerless attempt to escape a withered existence and it’s dreadful fate.”

Stream “Chthonicon” at THIS LOCATION .

MEPHITIC GRAVE’s Into The Atrium Of Inhuman Morbidity will be released May 7th on limited cassette and digitally via Carbonized Records and on CD via My Dark Desires Records and Nihil Productions in Brazil. For preorders, visit the Carbonized website HERE or Bandcamp HERE .

Into The Atrium Of Inhuman Morbidity Track Listing:
1. Entering The Atrium / The Gatekeeper
2. Chthonicon
3. The Vaults Of Strangling Fear
4. Withering Aeons
5. Straight Into Dead Madness
6. The Other Side Of Midnight
7. Anatomy Of Madness
8. Cosmic Prey

MEPHITIC GRAVE was forged in 2018 as a duo between guitarist Zoli and drummer Balázs, initially under the name Mothrot. Guitarist Knot and bassist/vocalist Ádám joined the following year. The first rehearsals exceeded expectations. Because Ádám already had ideas for lyrics, a concept of visuals arose within the band’s collective mind, leading them to eventually change their name to MEPHITIC GRAVE .