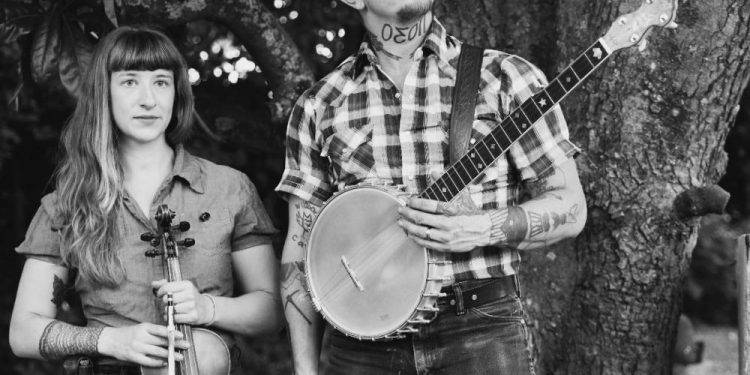 Anti-Corporate Records’ beloved The Magnolia Sessions returns this week, launching the second season of albums with a record from Lost Dog Street Band alongside the release of the band’s session recording today, The Sleeping Shaman is hosting an exclusive stream of the record’s “Carmelita.”

The first season of The Magnolia Sessions delivered a new record the first week of every month from its launch in September 2020 through May of 2021. The series showcases bluegrass, dark country, and folk singer/songwriter acts, recorded in an intimate outdoor setting by a large magnolia tree at the Anti-Corporate Music/Black Matter Mastering headquarters in Nashville, Tennessee, by owner Dan Emery. The first season yielded heartfelt releases from Matt Heckler, Jason Dea West, Johno Leeroy, Cristina Vane, Nick Hans, Casper Allen, Jeff Loops, Angela Autumn, and Austin Stambaugh have all recorded and released albums through The Magnolia Sessions, many of which debuted on the Billboard Bluegrass Charts.

Following a break over the Summer to record the majority of the second season, The Magnolia Sessions launches the new series with a record by the label’s dear friends, Lost Dog Street Band.

Founding Lost Dog Street Band vocalist/guitarist Benjamin Tod reveals, “We recorded these songs after doing farm work on our land in Kentucky all day and driving the couple hours to Nashville. I am not going to say these are incredible takes or even say they’re the best takes we could do of these songs. That’s not the point of The Magnolia Sessions , though. These are songs recorded the way you’d hear us after a long hot summer day in the woods around a campfire. I think it’s important to shoot straight from the hip and give the world something untainted by production or perfection ever so often for the sake of verisimilitude.

Tod continues, “These songs were recorded on the last night for one of our favorite canines of all time. Ichi was a seventeen-year-old, one eyed, red nose Pitbull I met around fifteen years ago. She has been at every single LOST DOG STREET BAND and Benjamin Tod recording session ever. You can hear her bark faintly in the middle of quite a few tracks and prominently at the end of ‘Rage And Tragedy.’ This album is dedicated to her. Thank you for all your contributions and we will see you down the line, Ichi.”

Dan Emery delves, “This was the hardest recording session I have probably ever done. Our dog had gotten sick, and she was quite literally on her death bed during the session. I made her a comfortable spot with me while Benjamin and Ashley were outside, and just laid with her and cried the whole night. A fucking bomb could have exploded in the yard, and I wouldn’t have cared any more or less. Benjamin and Ashley basically pulled all of us through the entire night. Had it not been for their professionalism, and ability to keep the train on the tracks while mine was very much derailing, I probably would have just thrown in the towel on the entire project right there. I love you guys, and even at our worst we continue to show our best. R.I.P. Ichi.”

Lost Dog Street Band formed in the winter of 2010 after husband-and-wife duo, guitarist/vocalist Benjamin Tod and fiddle player Ashley Mae, parted ways with former musical project Barefoot Surrender. Originally conceived as a duet, Tod and Mae quickly dedicated themselves to carrying the tradition of the American troubadour – hopping trains and hitchhiking across the country while delivering their unique brand of original songwriting and tragic storytelling.

In the summer of 2011, while performing on the streets of Nashville, Tennessee, they met Nicholas and Shannon Ridout, two skilled musicians traveling from the Pacific Northwest. Immediately inspired by each other’s music, the two groups began writing collaboratively and soon formed the band Spit Shine. The four musicians quickly built a friendship stronger than family, and together poured their blood and sweat into the music of Spit Shine. For the next two years Lost Dog Street Band took a hiatus, until Nicholas’s tragic death in the spring of 2013.

Pushing through the sorrow at the loss of their best friend, Lost Dog Street Band was resurrected with a fervency. Now doing very little street performing, the band tours the country each year, delivering their story through song in venues nationwide.

Drawing from years of lonely tramping, and more than one tragic loss, LOST DOG STREET BAND has crafted a distinct sound that is best described as “dark country” that never wavers from its roots and honors the traditions of its forbearers. In the same vein as country-legend Guy Clark, Benjamin Tod weaves his melodies and lyrics together to offer listeners an unapologetically raw and authentic account of the human experience.

Lost Dog Street Band has since relocated from their home base in Tennessee to Muhlenberg County, Kentucky. They are currently homesteading eleven acres of raw land.