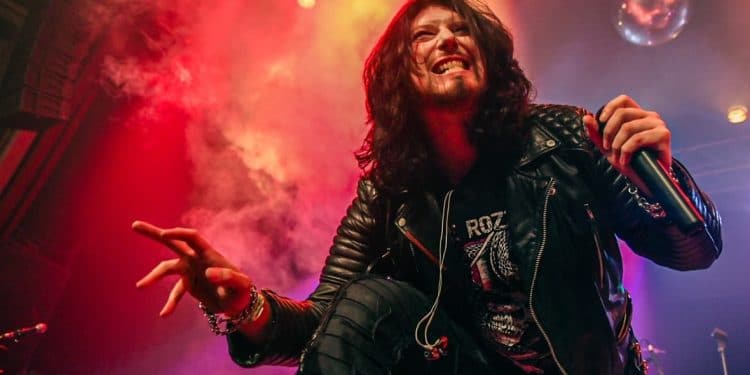 Kore Rozzik premiered their cinematic new music video for single “Vengeance Is Not Enough” today. The single is a nod to the band’s debut record Vengeance Overdrive and will release via The Label Group on Friday December 10th.

“We jokingly said Vengeance was not enough so it’s the faux sequel of sorts” says the band. “It’s the bridge between the first record and what’s coming next.”

It’s a story of power, revenge and money. The band decided to go a different route this time playing action movie characters instead of a standard band performance video. Kore did all of his stunts alongside long time friend Karlo Vice who now wrestles in the north east independent wrestling scene (Create A Pro Wrestling).

Kore adds, “I have always been a wrestling fan and have had the pleasure of having friends in the indies and WWE, so it was great to do something fun and physical on camera this time. Our last videos were horror based and this was more action movie based. James Bond meets WWE.”

The video was directed and co-conspirated by the highly acclaimed Tom Flynn who has done multiple videos with the likes of Lamb of God , Moon Tooth and Body Count just to name a few.

Kore Rozzik has risen from the underground to give the rock community the breath of fresh air it desperately needs. Fans have described the live show
as “Organized Chaos” and “a true high energy rock and roll experience.”

Their live sets on tour have earned them the reputation as: A can’t miss live act. Variety is key to the Kore Rozzik sound which contains classic metal vibes with a modern day twist, think of Alice Cooper and Motionless in White in a blender.

After years of organizing their own events and supporting national acts in New York City.-The band finally broke out and began playing festivals and DIY tours with the likes of Bunny The Bear and others in 2017.

After the release of their first official music video “Mistress,” the band began to gain more fans and simultaneously naysayers. Many considered the Video controversial due to its horror and suggested violent undertones. Nevertheless the band was signed to Cleopatra Records and released its debut record
Vengeance Overdrive.

A bold move for a new act, Vengeance Overdrive was a detailed
concept record featuring connected songs and skits based around the character of Kore Rozzik aka The Bastard Child Of NYC. The record hit a nerve with many classic metal fans as it told the story of a misunderstood musician who just wanted to be a rock star. With themes of slander, bullying, horror and the occult, it has become a cult classic among many fans.

As the record hit the metal charts the band embarked on their first
mainstream national tour supporting the also controversial figurehead OTEP. The band was well received and continued touring thereafter as much as they could to support the record.

In 2019 the band landed a tour as direct support for globally renowned guitarist Nita Strauss (Alice Cooper). The band had truly arrived as fans and tour mates respectively gave Kore and the band their seal of approval. The tour got rave reviews night after and night and further expanded Rozzik’s new fanbase penned the “Kore Locos.”

With the aftermath of the Covid pandemic the band is back in the
studio putting the finishing touches on new music. Kore will release more singles in 2022 with a collage of headlining and supporting runs.