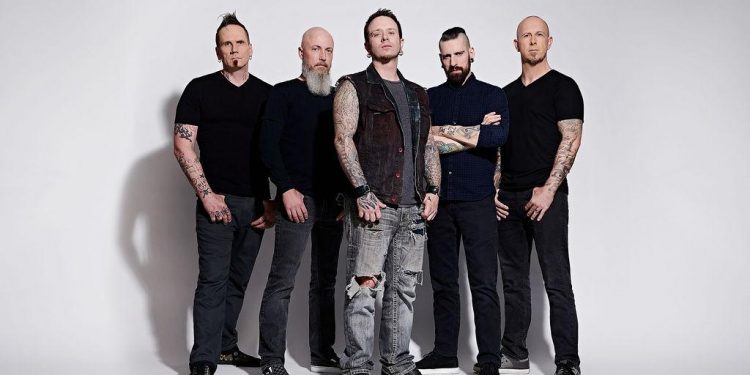 Canadian all-star modern metal band Imonolith has revealed a “Quarantine Sessions” playthrough video for the song “Hollow,” the first single from the group’s debut, State of Being.

“Hollow” is available via BraveWords.

The eighth video in Imonolith’s weekly “Quarantine Sessions” series of playthroughs was once again assembled and produced by vocalist Jon Howard.

“I decided to have some fun with this one,” Howard says. “’Hollow was our very first music video released back in January 2019, and I wanted to play around with some of the vibe we captured on that set. Since these are quarantine videos, we shoot ourselves jamming the tunes at home, but on this session, I went out to my garage to capture a different vibe! Just like the ‘Hollow ‘music video, I hung that same mic from the rafters and swung it around. Brought back some memories and was really fun to shoot again in a similar creepy setting.”

The unexpected downtime due to COVID-19 has allowed Imonolith to get creative with video content and to connect with fans in new ways. Tune in to Imonolith’s live feed on Instagram tomorrow at 3:30 p.m. EDT/12:30 p.m. PDT for a weekly discussion with band members about the playthrough video and much more.

“When my band agreed to do the quarantine video series together, I was really excited,” says Howard. “I’ve always wanted to make playthrough videos for every single song on an entire album. With Imonolith, we are making that shit happen! You get to see each member of the band performing each song on the entire album, all smashed into a cool home video. Pretty damn cool. Hope you enjoy and please check out the rest of our videos. CRANK IT UP!”

The album has seen the release of four singles and videos – “Hollow,” the 2019 debut single that made big waves, racking up 216K Spotify streams, “Instinct,” “Dig”; and the most recent single, “Becoming The Enemy.” With the release of these singles, Imonolith has already received worldwide praise that has garnered them a massive number of streams and attention from the media and fans alike.

State of Being is available in exclusive vinyl and CD formats at Imonolith Band, or you can stream the album at the service of your choice here.

“A force to be reckoned with.” – Metal Hammer

“Given the members’ diverse musical backgrounds, Imonolith don’t fit any obvious metal genre tag. Van Poederooyen and Wadell bring elements of prog, while Howard’s vocals are rooted in the metalcore and extreme metal.” – Consequence of Sound

“State of Being is built on a backbone of pure heaviness, hard-hitting riffs and irresistible hooks which keep the album burning at high intensity from start to finish.” – Sonic Perspectives

“Those looking for something that knows how to groove hard, offer a catchy chorus, or knock you flat on your back over the course of an album will find ‘State of Being’ to be an immersive listen.” – Dead Rhetoric

“A winning combination that works perfectly.” – The Rock Pit