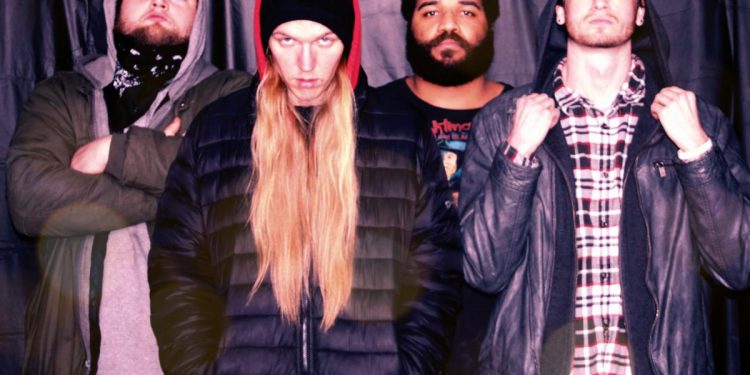 For the members of up-and-coming Indianapolis nü-metal band Identity Unknown, whose debut album Nothing Left to Give (Independent) is available now, the Covid-19 lockdown of 2020 was a blessing in disguise.

Formed by guitarist Jake Newman and vocalist Aaron DeHart in the spring of last year, Identity Unknown solidified their lineup over the summer, initially using the band as a fun and creative outlet during a stressful time. Soon the quartet realize they were on to something more.

Expanding on the low-tuned, growling groove riffs popularized in the late ‘90s and early ‘00s with the delivery and production of the ‘20s, Identity Unknown fully embraces the nü-metal tag, with head-bobbing bounce riffs, catchy choruses and driving breakdowns.

“From the very beginning, we always made it a goal that we did not want to sound the same as every other metal band out today,” says Newman. “The majority of popular metal bands today are in the metalcore or deathcore genres and we did not want to follow what was already being done. Instead, we challenged ourselves to try to put a modern twist on a genre that everyone in our band grew up on. Even today, nu metal is still a ‘bad word’ in the overall scene, but we are not afraid of the possible negative reception and that mindset has paid off for us. We have had great reception to our sound and how it is refreshing to hear a band like us play the way we do. Not a whole lot of bands are doing what we are doing from a style standpoint, which has helped us grow in an avenue that is not oversaturated.”

The band released two singles, “Not Feeling Sorry” and “Searching for the End,” last year as they readied their debut for release.

“It would have been much easier to put out a few singles or a 4-5 song EP, but we wanted to go all out and drop a full album to let people know that we are serious about this,” Newman says. “We feel like we have captured the nostalgic essence of what made nu metal great, while also challenging it with our modern twist. We’ve built a growing, dedicated fanbase and are very thankful that we were able to give our fans something to be proud of.”

Identity Unknown Debut Album Nothing Left to Give

“Indianapolis, Indiana-based nu-metal band Identity Unknown captures the sound of the early 2000s wave of those nu-metal acts that rose to the top of the charts like Korn . The Indiana based band puts emphasis on dark rhythms powered by crushing groove and well structured songwriting. They have now unleashed their debut album ‘ Nothing Left to Give ,’ and it’s a great modernization of an older genre. The album tops out at 10 tracks, all of which vary in their own unique way while keeping the sound rooted in a firm foundation. IDENTITY UNKNOWN has done a great job as a new band bringing what they want to be and sound like on display rather quickly and with precise execution. We highly recommend any fan of nu-metal to dive into the latest release by IDENTITY UNKNOWN .” – New Fury Media