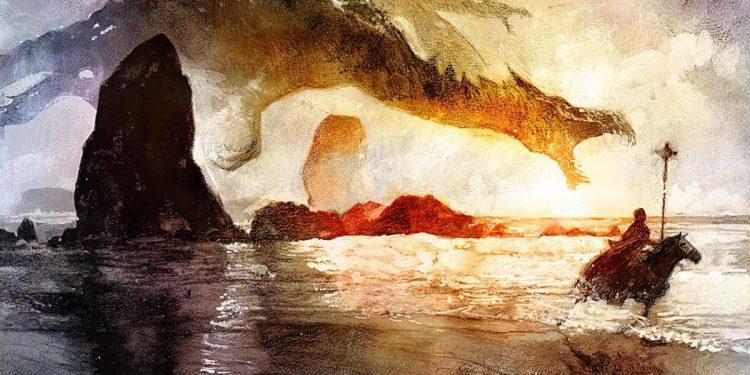 News of Z2’s 2021 lineup begins to roll out with news of what is sure to be one of the publisher’s most anticipated projects yet – the Holy Diver graphic novel, creating an original storyline inspired by one of heavy metal’s most iconic album covers. Today’s announcement brings news that acclaimed horror comics writer Steve Niles will tell the tale behind the events leading to the powerful moment captured on the cover of DIO’s debut album, definitively addressing 30 years of fan speculation. Why is the priest being thrown into the ocean? Who is truly the villain in this scenario? All of these questions are exclusively answered for the first time within the pages of this 120-page graphic novel.

“Steve Niles tells the story behind the album cover Holy Diver, a story about how you can’t judge a picture by the way it appears, which is what Ronnie wrote many times in his songs; that you have to see inside the person and not judge them by the way they look or by what they wear,” says Wendy Dio. “Together with Scott Hampton’s amazing artwork they tell the story of Holy Diver, and I know Ronnie would have given his stamp of approval on this great graphic novel.”

“We have managed to work with some of the greatest legends in both comics and music, and a DIO graphic novel with a cover by the great Bill Sienkiewicz perhaps sums that up best,” says Z2 publisher Josh Frankel. “This is one of the most iconic heavy metal album covers in history. We are honored to pay tribute to the originator of the universal sign of the music that he has inspired since he first took the stage with Black Sabbath 40 years ago. Working with Wendy Dio directly to ensure it is true to his vision is the next best thing to working with Ronnie James Dio himself, and we have hit a new high note with this one!”

In reverence, Steve Niles says, “I’m so excited to be writing this book. I hope I do Ronnie James Dio justice.”

Dio: Holy Diver reunites Steve Niles ( Criminal Macabre, 30 Days of Night, October Faction ) with Gotham County Line artist Scott Hampton for an all-new original story, inspired by the original iconic album art by Gene Hunter and Randy Berett. Two editions are available for preorder now; both the standard graphic novel, as well as a limited deluxe edition, the full details of which will be revealed within the coming weeks. Dio: Holy Diver is available for preorder now through the Z2 website . DIO ’s Holy Diver releases in summer of 2021.

About Z2 Comics:
Z2 is the premier destination for top quality music-based comics and graphic novels,
having worked across genres to deliver an authentic experience to diverse audiences.
Some of the publisher’s best-selling books include Apocrypha: The Legend of
BABYMETAL , YUNGBLUD Presents: The Twisted tales of the Ritalin Club and Eden: A
Skillet Graphic Novel , alongside debut works of graphic fiction by Dan Auerbach ( The
Black Keys ), Andy Biersack ( Black Veil Brides ), DJ Paul Oakenfold , internet sensation
Poppy, jazz trumpeter Dave Chisholm and others. Z2’s upcoming works include books
created with partnership with The Grateful Dead , Sturgill Simpson and others.