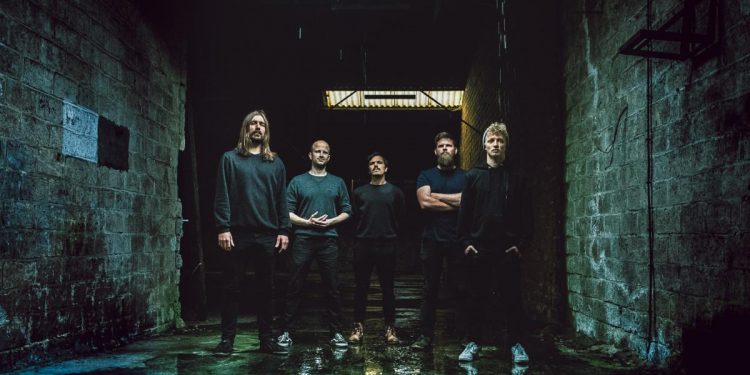 The power of music to conjure up images in the mind is as fascinating as it is undeniable – arguably, it is this very aspect of music that keeps us intrigued. Music, above all, makes us feel and experience things that are normally outside the scope of our ordinary lives. With their debut album Meridian , HIPPOTRAKTOR explores these characteristics to the fullest, creating an expression of the sublime – a greatness beyond all possibility of calculation, measurement, or imitation – that reaches beyond the mere conjuring of images into the realm of high art and philosophy.

Ever since the release of their acclaimed debut EP P’eau (2018) these Mechelen-based musicians have been honing their craft in songwriting and production, building a new home studio to record future material while also expanding from a three-piece to a five-piece ensemble. By adding singer/percussionist Stefan De Graef (Psychonaut) and guitarist/singer Sander Rom (L’Itch) to their ranks, Hippotraktor has become a more versatile outfit able to employ a broader palette of sounds, taking the band’s earlier instrumental prog metal sound to new heights. Taking notes from the best moments in contemporary progressive and post metal, HIPPOTRAKTOR captures the awe-inspiring power of nature – from the delicacy of the first falling leaf to the massive cosmic energy of the sun. By combining the big, catchy riffs and the rhythmical prowess of Gojira with the relentless but equally groove-loaded complexity of Meshuggah, Meridian delivers an overwhelming experience of sound, presenting the listener with sentiments that are recognisable, but with an intensity that seems larger-than-life.

“ Meridian finds its origin in everyday moods, taken out of context and morphed into a stylized version that reflects the dreamer in me,” explains main songwriter and guitarist Chiaran Verheyden. “It tells the story of someone who’s lost in a world too massive to comprehend, and seeks answers in places where none can be found. Meridian was written as an attempt to distillate what I felt but couldn’t put into words.”

As the main vocalist in the group, finding these words was the job of Stefan De Graef, who carried over his fascination for philosophy and religion from his other band Psychonaut. “ Meridian tells the story of a solitary wanderer on the Earth in the absence of other beings,” explains De Graef. “Without anyone to share knowledge and history with, the protagonist is forced to create his own truths and stories about the nature of life, consciousness, and the universe. The protagonist begins to personify and deify his surroundings, assigning sentience to the trees, the mountains, the wind, the waters etc. for they are his only companions in this desolate world.”

Essentially, Meridian is an exploration of the evolutionary theory of naturism, which was put forth by German scholar Max Müller in the 19th century, and which argues that religion finds its origin in the deification of the forces of nature by early human beings. By juxtaposing this sociological theory with seven tracks that unfailingly conjure images of the earth, sea and sky, HIPPOTRAKTOR has created an analogy that enlarges the imaginative quality of their music to epic proportions. Combining the best of prog, groove and post-metal, Meridian comprises an incredible ride for fans of soaring hooks, technical riffing and earth-shattering breakdowns.

In advance of the record’s release, today HIPPOTRAKTOR unveils new video and album opener, “ Manifest The Mountain.” Here, Hippotraktor pushes a massive Gojira-esque groove downhill and tips it over the edge, resulting in a landslide of a post-metal breakdown. Capturing the majesty of mountains in a sweeping sonic portrait, “Manifest The Mountain” then ascends with the upward force of tectonic plates in collision, providing a powerful statement intent for Meridian.