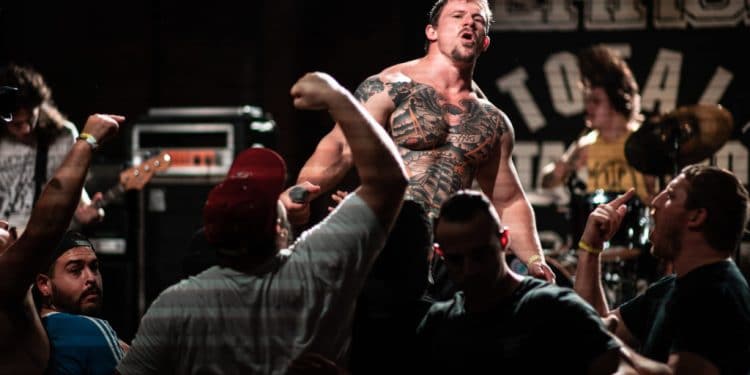 Harms Way Support Stick To Your Guns concerts in November. The Chicago hardcore outfit will be on a limited number of dates
through California and Nevada playing Anaheim, Henderson, and San Diego. Initiate additional support on the mini tour. Tickets are on sale now. See all confirmed dates below.

Harms Way Support Stick To Your Guns Concerts in November

Harms released their Posthuman full-length via Metal Blade Records in 2018. Having grown with each subsequent release, Posthuman was a devastating addition to Harms Way’s catalog. Exclaim! hailed, “an impressive display of brute force that keeps its momentum up from beginning to end.” Pitchfork wrote, “The swole Chicago hardcore band’s latest album shows their raw strength while adding shades of industrial and groove metal for character,” while Metal Injection added, “ Harms Way Posthuman gives fans absolutely solid hardcore material, promising utter chaos while providing some welcoming blends in variety in regards to tone and sound. From beginning to end, Posthuman is pure savagery and an early contender for one of the year’s heaviest albums.”

In 2019, Harms released a remix EP of Posthuman titled PSTHMN. Commented the band, “ PSTHMN is the evolutionary counterpart to our 2018 full-length, Posthuman. It includes four remixed and reinterpreted tracks by artists that have continually inspired and influenced the band throughout its tenure. These artists include Justin Broadrick (Godflesh, Jesu, JK Flesh), Andrew Nolan (Intensive Care, The Endless Blockade, Column Of Heaven), and Sanford Parker (Mirrors For Psychic Warfare, Corrections House). Additionally, the release includes a reimagined version of the track ‘Unreality’ by our very own bassist, Casey Soyk. PSTHMN follows the vision of Posthuman and sheds light on influential aspects that have shaped the sound and aesthetic of Harm’s Way.”

To preview and purchase Posthuman and PSTHMN go to: metalblade.com/harmsway.