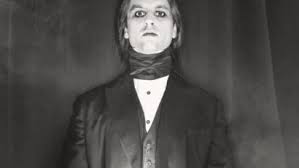 An endeavor conceptualized, composed, and performed by sole member, Hazard, Les Chants Du Hasard was spawned from the notion that metal is a musical style that deals with extreme emotions, anger, violence, darkness, despair, and whose goal is to create an aural experience of those emotions, something more than just music, that would submerge the listener. “I wondered what would be the best way to create such music,” recalls Hazard, “and the answer I found is that one needs the most expressive musical means. Now, what is the musical vessel with the most possibilities, the most nuances and that has been refined for centuries by very talented people? Orchestra.”

Livre Premier, released in 2017, was the materialization of that idea. Livre Second, released two years later, dug further. “It was definitely more focused and confident than its predecessor, getting closer to what I wanted to achieve: orchestral music as dark and violent as metal. The production is clearer, deeper and stronger; the arrangements, richer; the atmospheres are more majestic than before.

“In Livre Troisième,” he continues of his latest offering, “I strayed away from this idea. The working process was divided in two. I first did a piano version of each song, something like a rough sketch of the melodies and harmonies. This gave me the whole structure of each song, an idea of where to put the voice as well and the general atmosphere. Then came the orchestration. Roughly speaking, it’s where you decide which instrument — or combination of instruments — will play which melody. This is where you have to be very careful, because a poor choice can ruin a good idea or make it dull. But, a good orchestration can dramatically enhance an idea, given all the different instruments that you have at your disposal and all the possible combinations.”

The result is an eight-movement, avant garde masterwork that seamlessly fuses neoclassical bombast, gothic opera, and a blackened metal spirit to manifest a sophisticated sonic grandiosity of extraordinary proportions. At once romantic, tragic, tortured, and triumphant, Livre Troisième is breathtaking in the most literal sense treading with the emotional weight and fervor of a thousand suns.

“Since the first album, Olivier Prouvost, professor at the music conservatory of Paris, handled the mix and mastering and advised me on the orchestration and composition. He took it to a different level this time and dramatically enhanced the music with a bombastic sound. The voices are more diverse on Livre Troisième , with soprano, tenor, child voices, spoken words as well as ‘metal’ voices and the music is also more diversified with different moods and not only oriented towards violence.”
Much like a fine work of cinema, it’s an album that needs to be taken in as a whole, rather than as a collection of songs. “Is it still metal?,” Hazard asks rhetorically. “This question is now irrelevant. LES CHANTS DU HASARD has its own style; call it how you like.”