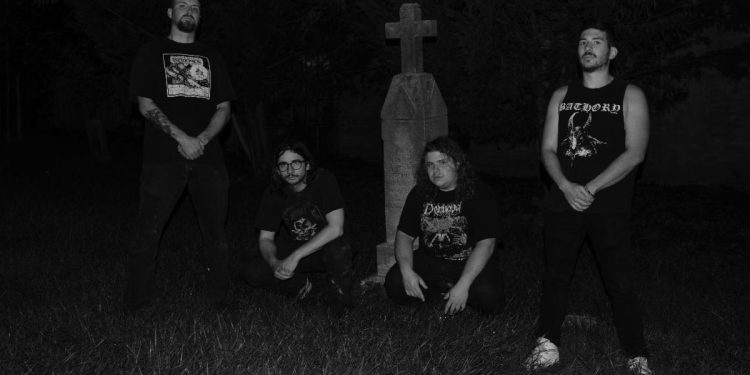 Genocide Pact full-length album is currently streaming via BrooklynVegan. The premiere of the self-titled release comes on the eve of the record’s official release, Friday, December 3rd through Relapse Records.

Writes BrooklynVegan, “It hearkens back to old school late ’80s/early ’90s death metal, and it’s very much in touch with the genre’s hardcore punk roots but still firmly a ‘metal’ album. And though Genocide Pact’s influences aren’t hard to guess, they offer up much more than idol worship; Genocide Pact make these time-tested sounds feel fresh. And most importantly of all, this album just rips.”

Stream Genocide Pact in its furious entirety at THIS LOCATION.

“This album reflects on the feeling of watching the world crumble while dealing with personal tragedy,” says guitarist/vocalist Tim Mullaney. True to his word, every track on Genocide Pact is a sonic assault brimming with palpable malaise. From the guttural screams in the album’s opener “Led To Extinction,” to the driving double bass that carries “Perverse Dominion,” and a head rattling low end on “Deprive Degrade,” Genocide Pact is wholly negative death metal.

The fury behind Genocide Pact captures the band’s collective frustrations and personal journeys through these turbulent times. “You turn on the news and see mass shootings, a global pandemic, endless war, and corporations and politicians trying to sell you bullshit,” says Mullaney. “You pick up your phone and another friend or family member has died. On top of that, you’re broke as fuck and work endlessly for a boss that doesn’t even know your name. You find yourself paranoid, pissed off, and embracing nihilism.” GENOCIDE PACT has learned to embrace the negativity, churning out one of 2021’s ugliest and unforgiving records.

“…a gut-bruising sock of bare-knuckled grind and leather-booted death-metal that’s the sonic equivalent of getting jumped in an alleyway behind the venue.” — Revolver

“…it’s an album that showcases the band sounding tighter than ever before. Without being labeled as a death/doom band, GENOCIDE PACT aren’t shy in treading that sacred ground that was forged by Bolt Thrower, a slow crawl across the battlefield with heavy and chunky riffs leading the charge…” – Invisible Oranges

“‘Perverse Dominion’ is a brutal rager that toggles back and forth between classic metal riffage and pure guttural sludge.” – Stereogum

“Their crunching death metal just bleeds pain and disillusionment as the band unloads the pressure and anxiety they have faced along with us in a world filled with people who seemingly don’t care. This record is the last eighteen months gift wrapped in pain, torment, and hurt that never seems to end.” – Meat Mead Metal

“This record has tracks in the most real sense, the kind that stay with you and have you not only humming the riffs but retaining the song’s structure. This is death metal with crossover appeal not necessarily to hardcore, but rather to the metal world at large outside of extreme metal. Stadium death metal indeed.” – No Echo