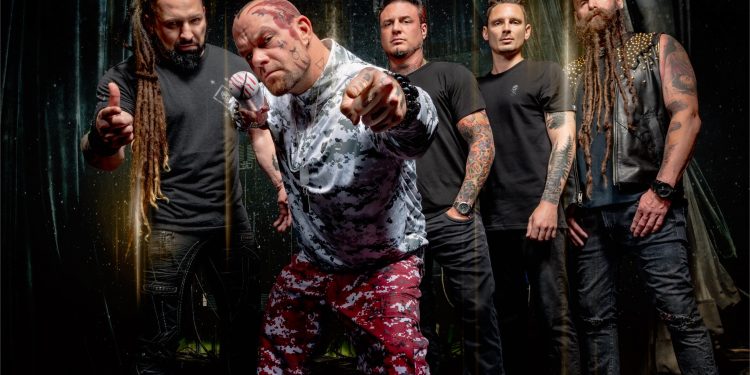 Five Finger Death Punch celebrate yet another incredible achievement in their career by winning the prestigious “Best Live Act” award at the 10th anniversary edition of the AIM Awards.

The band are currently on the set of new horror movie The Retaliators filming their parts and recording a music video for the film soundtrack. From Las Vegas Ivan Moody, Zoltan Bathory and Chris Kael share their thoughts: “We want to take a second to tell you what a tremendous honor it is to receive the best live act AIM Award 2020 and an extra special shout out to AIM for always providing growth and opportunities for independent artists and labels. WE are proud to be one of them. We look forward to seeing every last one of you out on tour sooner than later, stay safe out there, keep well!”

Alongside the thrilling news, Five Finger Death Punch just released a brand new lyric video for the track “This Is War”

This success follows the band’s single “A Little Bit Off,” the track was #1 at Active Rock Radio in the USA and is the current single. “A Little Bit Off” is taken from the latest album F8, which debuted at #1 on Rock charts worldwide with a Top 10 Mainstream chart debut in the US, Austria, Australia, Canada, Finland, Germany, Sweden, Switzerland, UK and more. Five Finger Death Punch has amassed over 7 billion streams to date, over 3 billion video views and is the biggest artist in the hard rock space measured by total consumption (digital sales added to digital streams converted to sales) having recently surpassed Metallica and AC/DC.

Over the last decade, Five Finger Death Punch has become one of the most recognizable names in music. The band has 22 Top 10 singles with 9 #1 singles and has sold over 1 Million concert tickets in the past two years alone. They have sold over $40 Million in merchandise globally. Every record since the release of the band’s 2007 debut album The Way of the Fist, has been certified Gold or Platinum by the RIAA – 3x Platinum and 6x Gold. The band has earned numerous awards and honors and is one of the few recipients of the prestigious Soldier Appreciation Award from the Association of The United States Army. Recently, Five Finger Death Punch was nominated for Best Rock Song and Best Rock Artist at this year’s iHeartRadio Music Awards.

The band intends to head out on the road this fall, barring official restrictions imposed due to COVID-19. All dates can be found here.