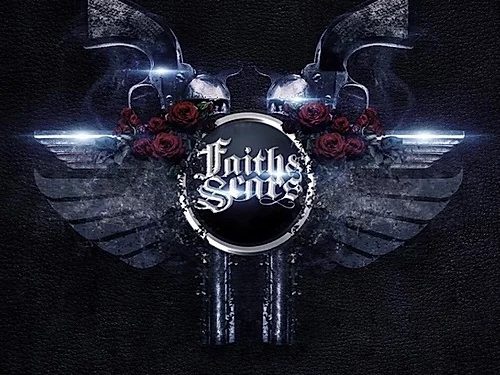 Directed by Roger Glenn and Jaiden Hord Frost, “Long Way Home” is off the band’s upcoming album, Revolver, due out October 17th, 2020.

“This is the 4th video from our upcoming album Revolver. This could be interpreted as the revolver’s origin story.

‘Long Way Home’ is a departure from our trilogy, ‘Breathe’, ‘No Apologies’, & ‘Never the Same’. It introduces a new storyline, representing persistence & balance. We wrote ‘Long Way Home’ as a reminder to remain grounded, in tune with yourself, & focused in the midst of the storm that is life. Oftentimes life will strike us like a tidal wave. Saying it can be hard to endure is an understatement. The lyrics promote positive state of mind, & self caring. We believe that, especially in the unknown, taking that extra moment to breathe, relax, and re-align with oneself is crucial to maintaining a positive mindset..” – FAITH & SCARS 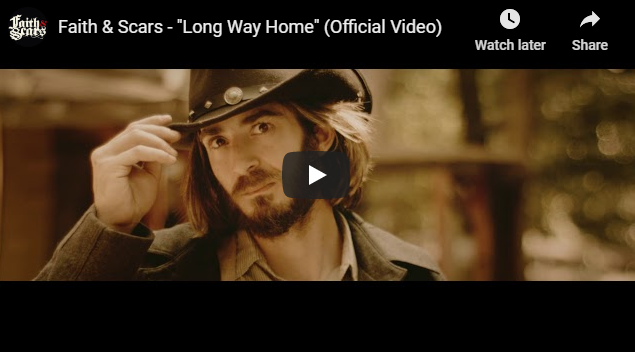 “This was the biggest production we’ve done so far, and it was a blast!! We had an amazing experience hopping back in time, & reimagining ourselves in The Wild West, 1885. When we were pitching ideas for this shoot, Roger remembered visiting “Wild Bill’s Western Town – Shadowhawk” in high school. Shadowhawk is located just minutes from where Roger grew up in Smithfield, North Carolina. It’s a replica Wild West town built in 1997 by former Hollywood actor Bill Drake. Drake played roles in episodes of Gunsmoke, Bonanza, and appeared in a number of ’70s-era Westerns.

Shadowhawk was much more than a backdrop for us. Being on set was indescribable. There’s a real energy about that little western town that threw us back in time. It suspended our disbelief & for that entire shoot, we lived the roles. We felt like real life cowboys. Definitely a childhood dream come true! On top of the mind blowing experience, the staff of Shadowhawk were incredibly kind & courteous.

Once we had the location nailed down, we moved into production. This was not easy by any stretch of the imagination. FUN, but not easy! Roger put weeks into storyboarding, writing scripts, & creating the shot list. All the wardrobe was put together by Logan & Roger, which was also no easy task. Roger & Cheyanne Liverman, who’s making her 2nd appearance in a Faith & Scars music video, made all the ‘wanted’ posters seen in the film as well. Cheyanne completed the weathered look of the posters with aging & distressing techniques using coffee, scissors, and fire.

After we had the scripts, storyboards, shot lists, wardrobe, & setting, we still had to find a way to bring the town to life. We looked no further than our friends & family. We had Cheyanne Liverman play multiple roles in the film. She was an extra in a couple of scenes, and a quickdraw cowgirl in the bar scene. We also called on our great friend, Eric Anderson. Eric played an extra in the town, but primarily the Sheriff. He did an awesome job bringing that character to life! We also got to play our own parts in the film! Again, not to be cliche’, but to be able to act in a western was truly an honor. The little kid versions of ourselves would be over the moon to see this. We brought back Filmmaker Jaiden Frost for the shoot. He’s always a blast to work with, and has an amazing eye for film. We spent many weeks after the shoot with him editing it all together. He’s amazing at what he does, and we couldn’t have done it without him. We found out the hard way, to shoot a western is to live a western! It was nothing short of 107 degrees in those buildings, but we made it through! Putting it all together was grueling, but it was rewarding. It was a group effort, and we couldn’t be happier with the finished product.

We’ve thoroughly enjoyed this whole experience, and we’re so grateful for the support we’ve received so far! Keep an eye out for easter eggs of what’s to come!

Faith & Scars is an American Rock band. With members hailing from all around the US, (North Carolina, Virgina, and Florida) they are currently based out of Selma, NC. They come at you with a southern flare and a touch of soul. Even through their most difficult times, Faith & Scars has found a way to stick together; bound by their mantra: Keep the Faith.

We are Faith & Scars and this is Revolver”.