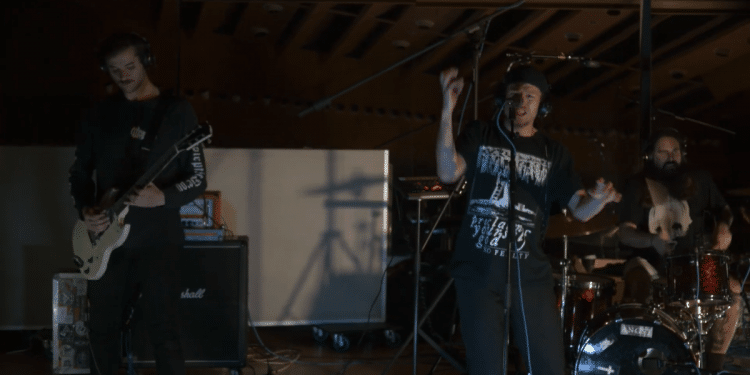 Twisted Copenhagen, Denmark-based hardcore mongers Eyes present a live session video, filmed from a performance at the Royal Danish Academy Of Music. Decibel Magazine is now hosting an exclusive premiere of the set.

Eyes released their debut album, Underperformer, this past September, scorching eyes and ears with their unique fusion of punk and metallic hardcore. Having only been able to play a few pandemic-regulated shows in Denmark post-release, the band has instead set out to record as much live action as possible, first through the Angry Music Sessions series, and now the band is ready with a three-song session, recorded by Frederik Brandt Jakobsen and filmed by Vincent B. G. Kosmol at the The Royal Danish Academy Of Music in Copenhagen.

Lead singer Victor Kaas states, “Frederik approached us and asked if we wanted to do a live session and told us that he’d gotten access to the legendary Studio 3 at The Royal Danish Academy Of Music, an old former DR Radio studio, used by the likes of Miles Davis. We had just done another session at Angry Music Studios, but we really couldn’t pass up an opportunity like this. We decided on a more subdued form of performance, as you’d see on a radio show or an Audiotree session. Vincent, who’d handled the camera on our last session, did this one as well and he knocked it out of the park. We’re stoked on how it turned out, and it’s really a different perspective of us as a live band – one you’d rarely get to see, unless you snuck in and hid in our practice space!”

Decibel reflects, ” That subdued form of performance is juxtaposed with the stompy, jangly form of metallic hardcore that the quartet play. With a setlist comprised of tracks from their last full-length, Underperformer, EYES blow off some of their quarantine-related frustrations and give one of the first performances since the album’s release.”

Check it out RIGHT HERE.

As for shows in real life, EYES has been confirmed for Denmark’s big metal festival, Copenhell, as well as Prime Fest, both in June, while the band has just signed with Kongfuzi Booking for European booking duties, and performances in both Denmark and Europe are being planned for the Fall/Winter of 2021/22.

In other news, Eyes’ eponymous 2018 debut EP is now being released on vinyl for the first time on March 5th. The seven-song effort pierced the scene upon its arrival causing a healthy underground hype to unfold, which exploded fully with the release of Underperformer. The vinyl version will be available in 200 black copies and 100 transparent red copies, with the red version being almost sold out through Indisciplinarian.

Eyes’ Underperformer was produced by Tobias Munk Tønder (Église, Drukner), mastered by Jacob Bredahl (Lifesick, I Am Bones) who also contributes guest vocals on the record, and completed with art/design by Jon Gotlev/No Heroes. The album was released September 25th 2020 on vinyl (400 black and 100 white copies), tape (100 copies) and digital formats – the vinyl version is sold out from the label, but can be ordered via the band HERE.