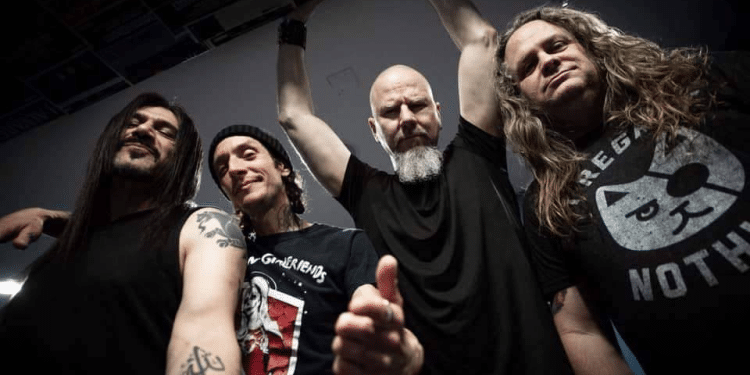 Exhorder US headlining tour 2021 kicks off November 24 and runs through December 19, 2021. New Orleans thrash icons return to the road will see the band performing their classic 1990 debut, Slaughter In The Vatican, in its entirety!

Comments vocalist Kyle Thomas, “It seems kind of crazy that Exhorder is finally doing a proper US tour for Slaughter In The Vatican in 2021, thirty-one years after its release. The opportunities and possibilities didn’t line up for us back in the day, so we’ve decided to take this show on the road and give everyone a proper tribute to this landmark album. As a band, we are truly grateful and honored to be able to do this, and for me it’s simply amazing. Almost like watching one of your children grow up and succeed in life! Without overstating the obvious too much, it’s going to be immeasurably exciting to once again take the show on the road after more than a year and a half on hold due to the pandemic. May we all find good health in the upcoming months to make the shows on this tour as exciting to witness as it is for us to perform them! We look forward to rolling with our support acts Take Offense, Extinction A.D., and Plague Years as well. See you all soon, can’t wait!”

Formed in 1986, Exhorder’s thirty-five-year long (and counting) journey has proven exciting, yet tumultuous, fraught with euphoric peaks and crippling valleys throughout its existence. The band recorded their controversial classic demo, Slaughter In The Vatican, in 1987 and from there, the international attention the band drew via the world of underground tape-trading was indisputable. As fate would have it however, the band broke up for the first time in early 1988 due to internal struggles. A reformation ensued later that year and Exhorder set out once again to pursue its vision.

The band soon signed with Mean Machine Records but the label dissolved before the band’s debut could be completed. The contract was subsequently purchased by R/C Records, a subsidiary of Roadracer/Roadrunner Records in the United States. With a small recording budget and repair to previous sessions, Slaughter In The Vatican was completed and released with the assistance of legendary producer Scott Burns in 1990, nearly five years after much of the material was written.

Following a series of lineup shifts, a second full-length, and multiple hiatuses, the band finally relaunched itself in 2017. Legends grow over time, and new generations emerge to keep them alive. With the demand of Exhorder at an all-time high, the band set out once again to finish the job they had not yet completed. The band played a series of club shows and festivals to immense interest. A deal with the Nuclear Blast label was quickly inked and in 2019 the band released Mourn The Southern Skies. Rave reviews from critics and fans saw the band’s popularity increase yet again, and the band set out on the road to packed venues and large festivals.

In March of 2020, a direct support tour slot in front of Overkill allowed the band to showcase themselves at the level they had always strived to reach. Live reviews of the tour and audience reaction proved that the hunger for this band by the public continues to grow.

Slaughter In The Vatican, which was recently inducted into Decibel Magazine’s coveted Hall Of Fame series and re-released on vinyl, remains a crucial release in the annals of metal. Decibel hailed the band’s “precision groove and whip-smart thrash,” Invisible Oranges lauded a, “groundbreaking and incredibly heavy slab of groove-infused thrash and speed metal,” Sputnik Music commended, “an album which helped to kick-start the groove metal revolution, while staying true to its thrash roots,” while AllMusic observed the album’s, “death metal-style double kick drums, chugging guitar riffs played at both slow and blistering tempos, and…the gruff but very expressive lead vocals of frontman Kyle Thomas,” After a seventeen month halt in touring due to the pandemic, EXHORDER put on a legendary performance of Slaughter In The Vatican in its entirety at Psycho Las Vegas 2021 and are fully ready to return to the stage with the record that started it all.